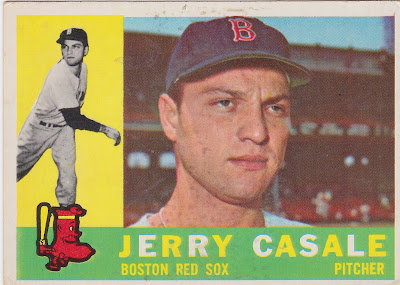 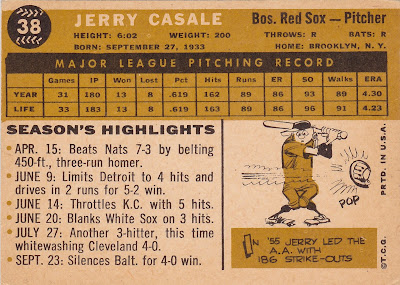 Career: Brooklyn native spent five seasons (mostly good ones) in the Sox chain and did a military tour before his 1959 rookie season. Went on to play for five seasons for three teams including the '61 expansion Angels. During that 1961 season, he gave up  Carl Yastrzemski's first career homer.

Off The Charts: From Wikipedia.....After baseball Casale went into the restaurant business. He opened a restaurant in Manhattan called Murray's with former New York Mets players Art Shamsky and Ron Darling, and later opened an Italian restaurant called Pino's on 34th Street in the Murray Hill section of Manhattan.

The Card: Run-of-the-mill card which may be a shot of Comiskey. Red seats usually mean Connie Mack but that wouldn't make much sense for this one. It does have the highlights bullet list, so there's that.