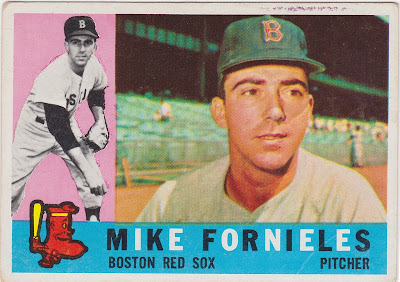 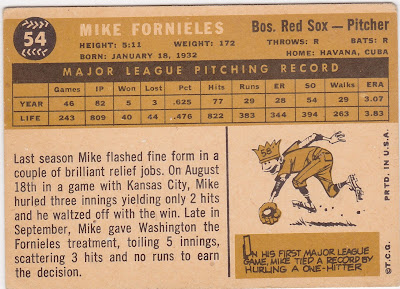 Career: He's a native of Havana, Cuba and was one of many Cuban players signed by Senators' scout 'Papa' Joe Cambria. Ha had a terrific first year stateside in 'B' ball and was impressive in a late look in Washington but was traded to the White Sox after that first year. He was an occasional started early in his career but was primarily a reliever for four clubs over twelve seasons. His best years came with the Red Sox. He made the All-Star team in 1961 and pitched to three batters: George Altman (homer), Willie Mays (fly out) and Frank Robinson (single).

In 1960: Arguably his best season as he led the AL in appearances and was second in saves to go with a 10-5 record and a 2.64 ERA. He won the first The Sporting News Fireman of the Year Award in the AL.

Off The Charts: His SABR bio is pretty entertaining and tells us that: "With Washington scheduled for a doubleheader against the Philadelphia A’s on September 2, 1952, the Senators decided to promote a pitcher from the minor leagues and called down to Havana for Raul Sanchez, a right-hander with a 10-9 record. Many players need some degree of luck to get their first opportunity in the majors and Fornieles was one of those. Sanchez was too sick to report, so Havana sent up Fornieles instead and Washington gave the 20-year-old the start in the second game of the doubleheader.'

'...He turned in one of the best pitching debuts in major-league history, throwing a one-hit shutout in a 5-0 victory, allowing only a second-inning single to catcher Joe Astroth and retiring the last 14 batters in order."

The Card: Bonus points for a pink section! It's not a stretch to assume this pic was taken at the same session in Yankee Stadium as the pic used on his 1959 card. I blew them up and the same people appear in the background (or so it seems).
Posted by Commishbob at 9:55 AM