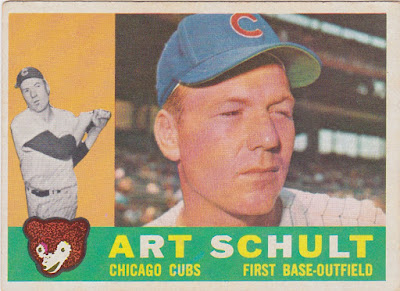 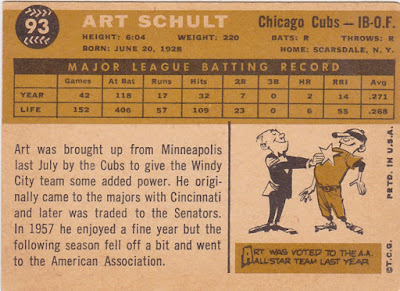 Career: Brooklyn-born Schult was a Yankees' signee who debuted with a small taste of the bigs in 1953 following a detour into the military during the Korean War. He bounced around through four other organizations and wound up with a season's worth of stats spread out over eight years.

In 1960: After a handful of games with the Cubs in April and May he was sent to the minors and that proved to be the end of his career.

Off The Charts: This Yankee site details the fact that Schult, as a returning serviceman, was entitled to a spot on their '53 roster. He refused a demotion to the minors and wound up making seven appearances for NY, all as a pinch runner! He later agreed to report to their AAA Syracuse club in return for a guaranteed World Series share.

The Card: Open your eyes, Art...you're in beautiful Wrigley Field! 😟 The card back blurb maintains he 'originally came to the majors with Cincinnati' but that's incorrect. And there is more Jack Davis work there on the back.
Posted by Commishbob at 8:28 PM