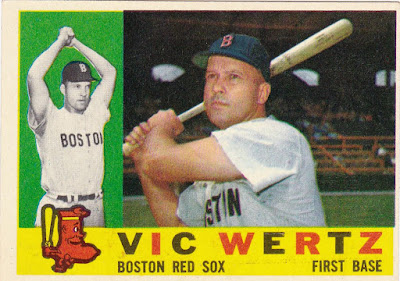 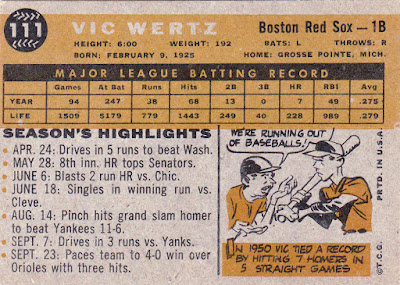 Career: He played 17 seasons in the majors and was a four-time All-Star as well as a four-time Top 10 MVP vote-getter. Yet he is primarily known for one swing of the bat...the drive in the 1954 World Series that Willie Mays nabbed with one of the most memorable catches in baseball history.

He played for five different AL clubs after breaking in as an outfielder with the Tigers in 1947. He had been an outfielder but moved to first base in '54 when he was traded from the Orioles to Cleveland on June 1st of that year. That deal sent him from a terrible first year Orioles club to the eventual AL champions.

In 1960: With his career winding down, Wertz had a very nice last hurrah in Boston. He hit .282 with 19 homers and 103 RBIs in his final season as an everyday player.

Off The Charts: Wertz was 8 for 16 with a dinger in that '54 Series but I bet he'd trade it all for about another foot of height on the shot that Mays caught.

But to his credit he never let it bother him. According to Wikipedia...


After he retired from playing, Wertz kept a photo of “The Catch” in his office at his beer distribution company and explained he had no negative feelings about being remembered for hitting a deep fly out.
"I'm very proud that I'm associated with it," Wertz told UPI in 1979. "I look at it this way: If that ball Willie caught had been a home run or a triple, how many people would've remembered me? Not many. This way, everybody who meets me for the first time always identifies me with Willie's catch, and that makes me feel good."


And to his further credit, he was a big supporter of Special Olympics through his businesses and personal contributions of time and financing.


Here's a short video of his two-RBI triple in his first World Series at-bat.