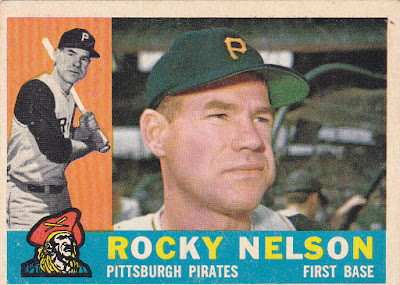 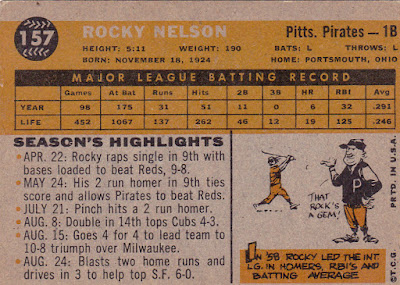 Career: In 13 MINOR league seasons, stretching from 1942 through 1962, Glenn Richard 'Rocky' Nelson did this...produced a .319 batting average, 234 home runs, three MVP's, three batting championships, all while averaging just under 35 strikeouts per season. In the majors, he didn't have that sort of success. He banged around over parts of (sometimes all of) nine seasons playing for the Cardinals (twice), Browns, Dodgers (twice), White Sox, Indians, and Pirates (twice!). He was generally a platoon first baseman/outfielder and pinch-hitter. It wasn't until 1960, at the age of 35, that Nelson had his moment in the baseball sun.

In 1960: 18 years after turning pro, Nelson had his first and only .300 big league season. He split the 1st base job with Dick Stuart and contributed to the Pirates pennant run. In the Series against the Yankees (his second, he had played for the Dodgers in the 1951 Classic) Nelson started Games Two & Seven, went three for nine, and contributed a first-inning homer in that wild deciding game.

Off The Charts: Here's a clip of Nelson's World Series homer via the Pirates Twitter. At least I hope it is...I've never linked to a tweet before. It doesn't seem to be on YouTube which is surprising since I have found dress rehearsals for The Last Supper on YouTube.

Rocky Nelson just looks like a ballplayer, doesn't he? Along with Bridges and Colavito, he was one of three 'Rocky's playing in the majors in 1960.