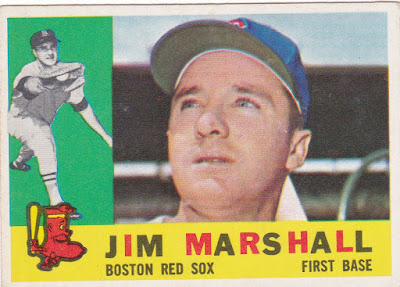 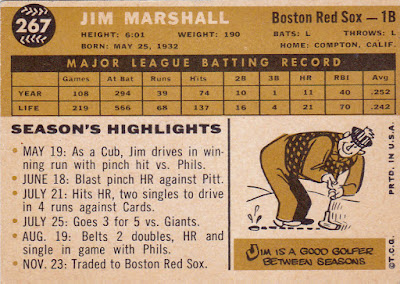 Career: Jim Marshall broke in with the Orioles in 1958 after spending time at Long Beach State, with three different minor league systems and (I'm assuming here) some military service time. In Baltimore he was behind Bob Boyd in the first base pecking order. Marshall was traded during his rookie season to the Cubs and played for the Giants, Mets, and Pirates over five seasons totaling just over 400 games. Despite being listed with Boston on this card he never played for them (see below).

A career .240ish Hitter, Marshall played in the inaugural game for the 1962 Mets, and was the second pinch-hitter called on by Casey Stengel on Opening Day. Three weeks later, with Marshall hitting .344 as a bench piece, he was traded to the Pirates where he ended his playing day later that season.

When his major league career was done Marshall took his bats to Japan and had three successful seasons with the Chunichi Dragons. He displayed the power he had flashed back in AAA ball and was an All-Star.

He was back in the US after that, managed in the Cubs' chain, and had stints as a big-league manager with the Cubs and Athletics. He later scouted the States for the Japanese Leagues, held a job scouting for the Yanks and eventually became the chief scout for the Diamondbacks in the Pacific Rim. At last report, he still holds that job.

In 1960: After being acquired via trade from the Cubs the previous November, Marshall was traded by the Red Sox TWICE before the season even started. They dealt him to the Indians on March 16 along with Sammy White for Russ Nixon. When White refused to report to Cleveland the deal was voided as of March 25th. Four days later Marshall was headed to the Giants for pitcher Al Worthington.

With the Giants, Marshall served as a pinch hitter and filled in at first and in left. He got into 75 games and hit ..237 with a pair of homers over 188 at-bats.

Off The Charts:  Marshall, an Los Angeles area native, was good enough at basketball in high school to receive a scholarship offer from John Wooden at UCLA. He instead played a year of baseball at Long Beach State before he was signed by the White Sox.

Like this snippet from an interview Marshal did a few years back for this blog:

A trade to the Orioles finally gave Marshall his shot at the majors in 1958 when he was 27 years old.   He roomed with 21-year-old Brooks Robinson that year. "There was never any doubt about his fielding, but he really wasn't a very good hitter back then. We're still friends. In fact, I just talked to him recently. I always tell him, 'I knew you before you could hit.' But he really worked hard on his hitting and he made himself into a very, very good hitter. That's always impressed me. And you have to give [Orioles manager] Paul Richards credit, he stuck with him because he couldn't hit anything at first. Richards could see what Brooks would become."


The Card: Just a bit of his Cubs' cap logo peeking out over the brim in this one.
Posted by Commishbob at 6:30 AM