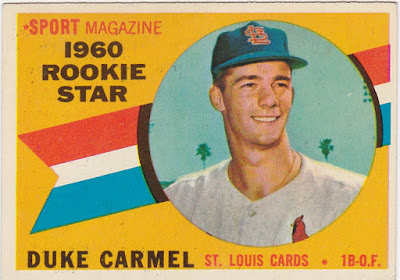 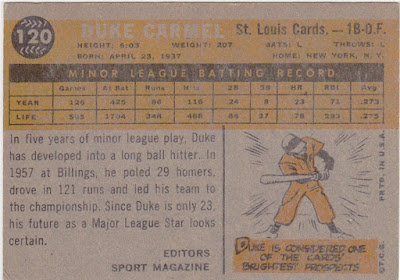 Career: New York City native Duke Carmel played in 124 big league games between 1959 and 1965 for the Cards, Mets and Yankees. He was also passed through the Dodgers and Indians organizations along the way. He showed lots of power in the minors but hit only four dingers in the bigs. The most interesting thing about Carmel is his transaction log...

WikiFact: From his Wikimedia page: With his name he might have been a natural for having a candy bar named after himself. But he probably would have had a better chance had he put up numbers in the majors like the .324 batting average, 29 homers and 121 RBIs he had in 1957 when he led the Billings Mustangs to the Pioneer League pennant, or the 35 home runs he hit for Buffalo in 1964.

The Card: I love these orange Rookie Team cards. The back of this one was plenty faded,