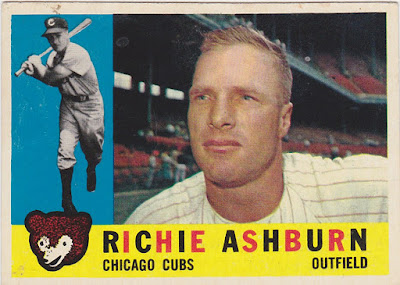 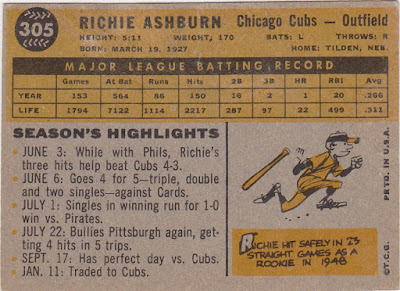 Career: Richie Ashburn was a five time All Star outfielder who won batting titles with the Phils in 1955 and 1958. In his 15 year career he led the NL in OBP four times, hits three times, walks four times, triples twice and putouts by an outfielder nine times. He was elected to the Hall of Fame by the Veteran's Committee in 1995. He had 29 career homers, seven of those coming with the '62 expansion Mets in his final season.

12 of his seasons were with the Phils and he returned to Philadelphia as a broadcaster after his retirement as an active player.

In 1960: This was Ashburn's first season in Chicago after 12 with the Phils. He was acquired in a trade for John Buzhardt, Al Dark and Jim Woods. He led the NL in OBP and walks. His .291 average was a bounce-back after having dipped into the .230s in 1959.


After his playing career, Ashburn was hired by the Philadelphia Phillies as an analyst in 1963. Originally, Ashburn worked with Bill Campbell and Ford Frick Award winner Byrum Saam. When Campbell left the Phillies in 1970, he was replaced by Harry Kalas. Kalas and Ashburn would work together on Phillies broadcasts for twenty-seven years.

Ashburn, who was a boyhood friend of comedian Johnny Carson, became known for his homespun stories of his boyhood in Nebraska. He would lament the mistakes of the Phillies with an "Oh brother." Photographs of an aging Ashburn showed him with a jeff cap and a pipe. His rapport with Kalas was both legendary and genuine, Kalas referred to him as "His Whiteness."

The Card: Connie Mack Stadium is the backdrop for the picture in this one. Ashburn wears Phils gear without a cap. Topps painted the Cubs' "C" onto his cap in the secondary picture. card has a nice color combo but loses points for a capless player. Poor Richie.
Posted by Commishbob at 12:00 PM