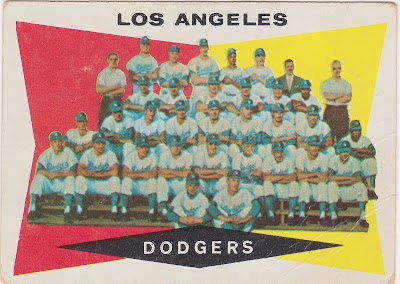 The 1960 Dodgers were, of course, the defending World Series champs. As so many teams do, they found it tough to repeat and they finished fourth, 13 games behind the Pirates. They again had plenty of pitching but were mid-pack in most important hitting categories.

Sandy Koufax was still a season away from blossoming into the most dominant lefty of his generation. Don Drysdale anchored the staff and his 15-14 mark is a result of the weak Dodgers attack more than anything he did. He had sterling numbers. Frank Howard won the Rookie of the Year award and led the team with 23 homers.  Maury Wills led the league with 50 steals. It was the first of six consecutive seasons he'd be the NL theft leader. 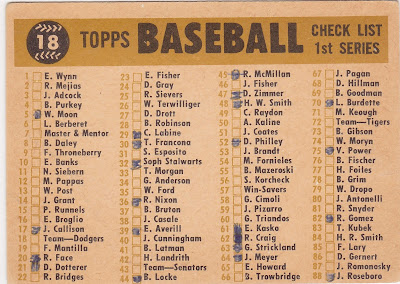 Obviously, the card is marked on the back. I have no issue with marked checklists. 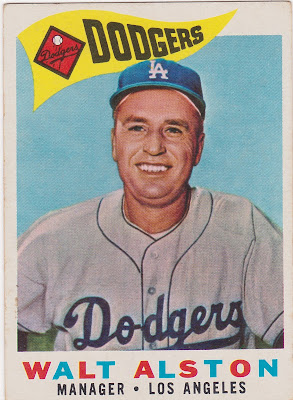 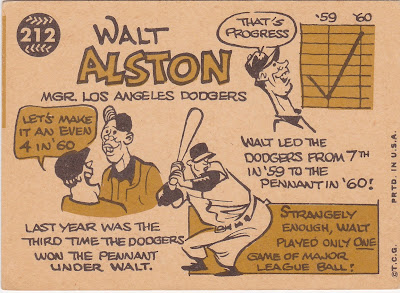 I have already posted this Alston card over on my Five Tool Collector blog. Here what I said:


Alston has one at bat in the majors. One. On September 27th of 1936, as a member of the Cardinals, Alston entered the game at first base after Frankie Frisch pinch hit for the ejected Johnny Mize. He came up to bat later and fanned. Made and error at first as well. Never saw the field in a major league game again, as a player at least.

That didn't deter him from having a standout Hall of Fame career in the Dodgers' dugouts in Brooklyn and Los Angeles. He took over the Dodgers from Charlie Dressen in 1954 and held the job for 23 seasons. His clubs won for World Series' titles and seven NL pennants. he managed 3658 games and won 2040 for a '558 winning percentage. Only four times out of those 23 seasons did the Dodgers finish in the second division of the NL.

The serious and studious looking Alston never signed more than a one year contract as manager of the Dodgers. As always he appears on his card looking like your favorite old uncle.

It was pointed out in a comment that the card back has an error. The cartoon on the upper right has the dates incorrect. They should read '58 and '59.

Of the four coaches pictured Bobby Bragan is the biggest name although Pete Reiser was probably the best known at the time. He was a Dodger outfielder through the 40s known for crashing into outfield walls.

Bragan managed the Pirates, Indians and most notably, the Braves from the mid-50s through mid-60s. He never won a pennant but spent a lifetime in the game and both Wills and Hank Aaron give him credit for improving their careers.

Greg Mulleavy had a brief big league career with the Red Sox and White Sox in the 30s and then was a coach and scout for the rest of his life. Joe Becker was a catcher who, according to Wikipedia is "a member of the relatively small fraternity of former catchers who became celebrated throughout baseball as a pitching coach (which included men such as Ray Berres, Dave Duncan, Rube Walker and Mike Roarke), Becker coached for four NL championship Dodger clubs, including the 1955, 1959 and 1963 world champions." 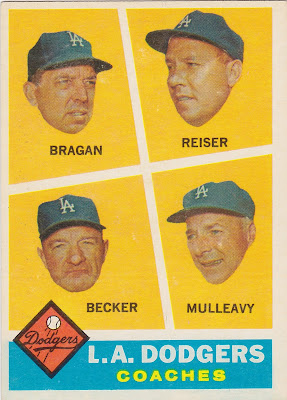 Posted by Commishbob at 6:04 PM