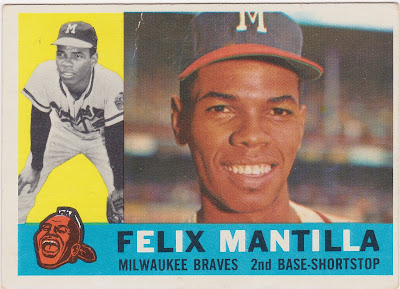 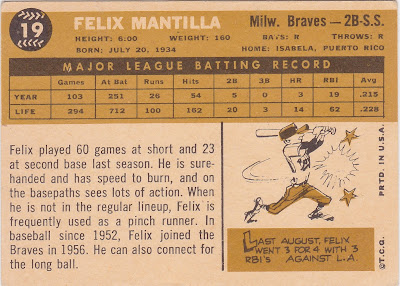 Career: SABR says the key word in describing Felix Mantilla is versatility. In 11 seasons, 6 with the Braves, he played everywhere except pitcher and catcher. He was a member of the '57-'58 Braves and won a ring. He was also a member of the 'Original Mets' club in 1962 and so in the course of four years, he saw the sublime and the ridiculous in the game. He finished his career with the Red Sox and Astros. He made his only All-Star squad with Boston in 1965 as the starting second baseman.

In 1960: Mantilla hit .257, his best in a full season with the Braves, while playing in 63 games. He split time in those between second and short with some outfield time as well.

WikiFacts: Even decades after his days with the Braves, Mantilla is doing good things for young people in the Milwaukee community and in his native Puerto Rico.

The Card: While I prefer the backs that have 'Seasons Highlights' there is nothing much I don't like about this one. It features one of the better color combos and Mantilla looks happy. Why shouldn't he be wearing the wonderful Braves' cap and uni?