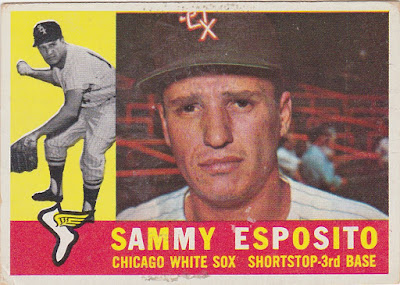 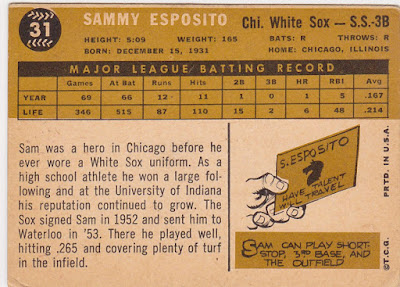 Career: Spent about a decade as a light hitting utility guy in his hometown of Chicago backing up Luis Aparicio, Nellie Fox et al. He finished up in 1963 with a short stint in Kansas City. The time he spent on the bench came in handy in his second baseball life as a collegiate coach.

In 1960: Fairly typical year for Esposito in that part of his career. He got into 57 games, came to the plate 88 times and hit .182 with one dinger. He subbed in at second, short and third and had plenty of time to contemplate how a World Series ring would have looked on his finger after the Sox came so close in '59.


Following his big league career, Esposito was a longtime baseball coach (1967-1987) and basketball assistant at North Carolina State University. He took NC State to the 1968 College World Series, their first appearance in that event. Among those he coached at NC State were future major league mainstays Dan Plesac, Mike Caldwell, Tim Stoddard and Greg Briley.

Extra Added Info: My mother, whose maiden name was Esposito, claimed she was related to Sammy, but we all knew she was kidding. I'd always love getting his cards so in a way he was among my first PCs.

The Card: Color me perplexed. That's Sammy wearing home ChiSox pinstripes but what's with the red railings in the stadium? I can't find any evidence that Comiskey Park ever looked like that. Yellow railings, yes (see pic below) but red? Nope. Maybe they were touched up by the Topps art department so as not to detract from the yellow/red/white card. Doubtful.

If you get the cartoon reference you are pretty old. First geezer in with the correct answer wins the internet. 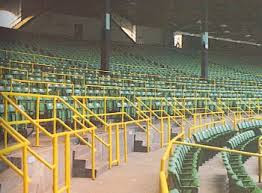 The Beatles at Comiskey: 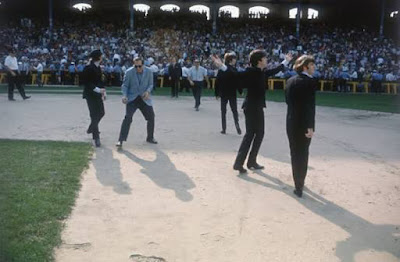 Wait, what? Yup the Beatles at Comiskey: 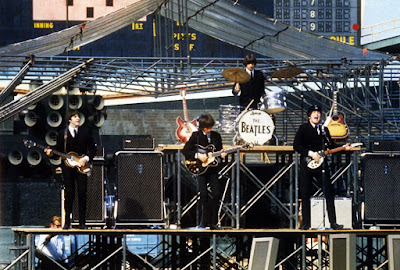