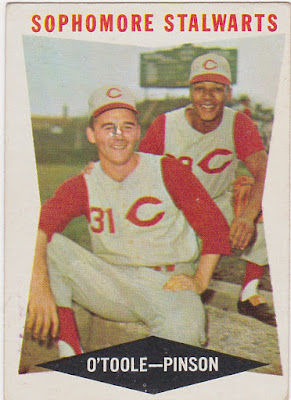 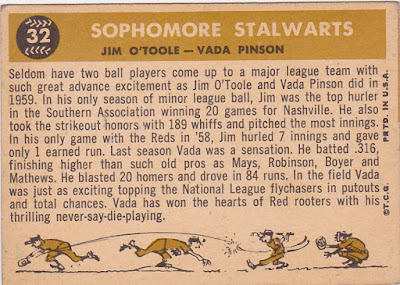 The Card: Jim O'Toole and his close friend Vada Pinson smile for the camera while posed on the dugout steps at Wrigley Field. I love the Reds' vest unis from that era. Even the roadies, while not as colorful as the spectacular home vests, were pretty sweet.

Both Pinson and O'Toole went on to solid major league careers and both have their own cards in this set which is where I will look closer at them both. For now I'll settle for a couple of personal stories.

When I was a kid I read a story about Jim O'Toole in the dearly departed Sport Magazine. It stated that O'Toole wrote "THINK" on his glove to remind himself to do exactly that while pitching. I wasn't a pitcher at any point in my brief baseball playing life but I thought that to be good advice so I did the same to my glove.

In June of 1970 in the second game of an Indians-Yankees doubleheader I witnessed the best baseball fight I've seen in person. In the top of the fifth with the Indians leading 2-1 and one man out Vada Pinson singles, goes to second on a ground out and then, when Stan Bahnsen uncorks a wild pitch, tries to score all the way from second. Bahnsen, covering home tags Pinson out with has glove to the face and Pinson came up swinging. Everyone piled out onto the field and lots of shoving and bear-hugging ensued. The haymaker from Pinson is one of the few really good punches I've ever see land in a baseball fight. I remember that we were surprised Bahnsen was back on the mound for the sixth. Pinson, btw, got tossed.
Posted by Commishbob at 7:57 AM