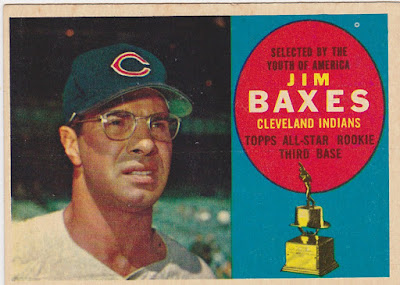 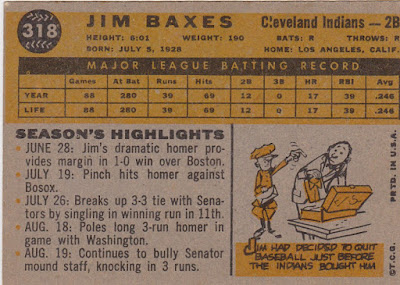 Career: Baxes played only one major league season but he had a long minor league career. Beginning in 1947 he made a slow climb as a low average, high power third baseman through the Dodgers' organization. He finally made the big club and was in the Dodgers' Opening Day lineup in 1959. But by mid-May was dealt to the Indians. He totaled 88 games, mostly as a second baseman, with over 300 plate appearances and hit .246 with 17 homers. He spent a couple more seasons in the minors before retiring..His brother Mike played a couple of seasons for the Athletics.

In 1960: After his only year of major league baseball Baxes played in the White Sox system in 1960. He was in the PCL, primarily with the San Diego Padres. It's worth noting that of the 39 players on the '60 Padres Pacific Coast League club 36 played in the majors as well.

WikiFacts: From a 1950 L.A. Times game story centering on a pitching outing by Baxes for the Hollywood Stars:


Hopelessly beaten, Fred Haney used the occasion for a bit of experimenting. He pitched Jim Baxes in the eighth inning….
The slingshot-armed infielder, making his first stab at flinging, allowed only one run and one hit, but also balked once, uncorked three official wild pitches and threw several other offerings behind the batters or in the general direction of first base….
Baxes also exhibited some fine sportsmanship.
When he came to bat in the home half of the inning, Pitcher Chet Johnson, obviously encouraged by his Seal teammates, purposely sped his first pitch behind Baxes’ back. Jim grinned. And so did everybody else, because it was a funny gag. Then Johnson would up and intentionally hit Jim in the back with a steamy serve.
The fans booed this unfunny topper lustily, but Baxes (and the other Hollywoodians) were big enough to ignore what could easily have been a riot-provoking incident.

The story, and a great pic of Baxes wearing uniform shorts in that game, is found here.

The Card: Baxes rocks the 50's specs at Yankee Stadium. The cartoon, another Jack Davis production, is interesting in that it mentions Baxes being close to quitting the game before being 'bought' by the Indians. A little 'slice of life' drama you rarely see on a baseball card. Baxes was actually traded for by Cleveland, not 'bought'.
Posted by Commishbob at 2:27 PM