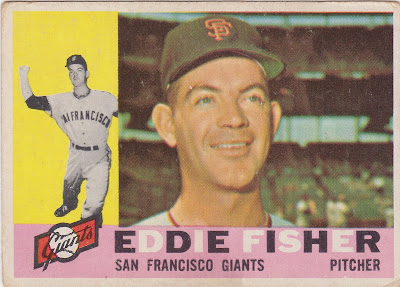 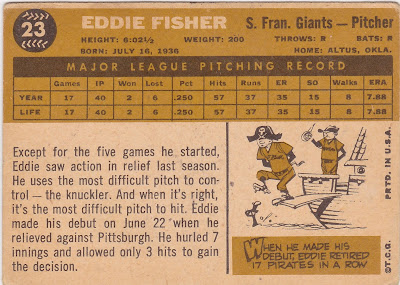 Career: The knuckleballing reliever pitched for six teams over a 15-year major league career. 1965 was his best season by far as he had 15 wins and 24 saves to go along with his 0.94 WHIP. He finished fourth in the MVP balloting that season (for a White Sox team that ended up second in the AL). That effort earned him a trade to the Orioles the following June. Like everyone else in the '66 Orioles bullpen (except Moe Drabowsky) he earned a ring without breaking a sweat.

In 1960: After a mid-season 1959 debut with the Giants that proved rather bumpy after a first appearance win, Fisher spent the season as a starter in Tacoma for the Giants' AAA club. He got into three games after a September call-up.

The Card: Love the pink on the front. I wish I had a dollar for every vintage Topps card back cartoon that showed a 'pirate' walking the plank.  As for the picture on the front...my guess is Wrigley Field.
Posted by Commishbob at 10:59 AM