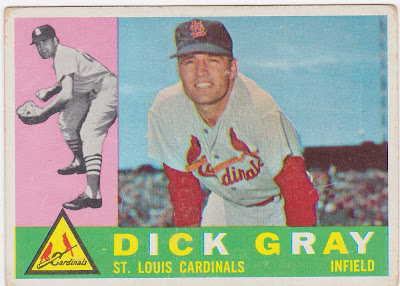 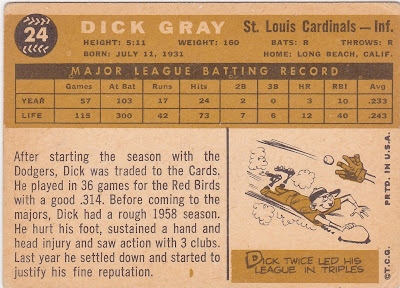 Career: He was highly touted as he worked his way up the overstocked Dodgers' chain and finally broke through when the club moved west. He was sidetracked by injuries early in the 1958 season and never really recovered his hitting prowess. He never played a full season in the majors finishing with a .239 average and six homers. Four of those homers came in the first nine games ever played by the Los Angeles Dodgers.

In 1960: He had five at-bats for the Cardinals before he was traded to the Pirates in May in a deal that sent Julian Javier to St. Louis. The Pirates kept him at AAA for the season where he struggled at the plate hitting .255.  He never returned to the majors.

Off The Chart: Baseball Reference tells us that...


From the time the Brooklyn Dodgers moved to Los Angeles, CA in 1958 until Ron Cey took hold of the third base position for a decade starting in 1973, over three dozen different players where used at the hot corner. But the very first one in that 1958 season was 27-year-old rookie Dick Gray, who arrived in the majors after his big year with St. Paul in 1957.

Gray was the regular third baseman for the Dodgers in their opening series against the San Francisco Giants at Seals Stadium. On April 16, 1958, in the second game of the series, the Dodgers crushed the Giants, 13–1. In the second inning of that game, Gray belted a two-run homer off Ramón Monzant, to become the first player to hit a home run in Los Angeles Dodgers history.


The Card: Plenty of pink in this first series so far. This is my original copy of this card but I have since upgraded it (along with a few dozen others) thanks to the vintage bins at the local hotel show.
Posted by Commishbob at 2:40 PM