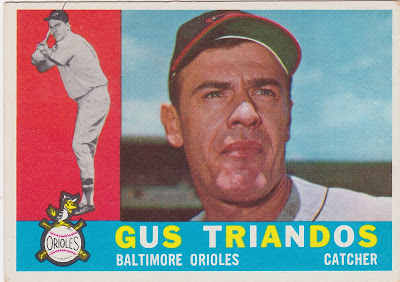 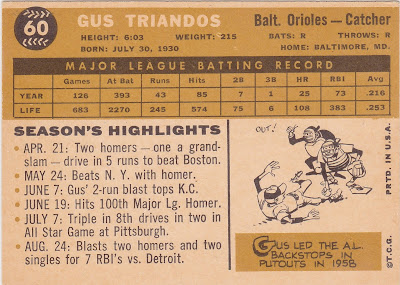 Career: The “Golden Greek of Chesapeake”, as he was known in Baltimore, began as a Yankees farmhand and was far down the list of catchers in the team's stocked system. The Yanks gave him a couple of looks and then he was dealt in a 17 player deal to the Orioles in November of 1954. He became the Orioles first 'star', a powerful, extremely slow, and much-loved icon in Charm City. He played eight seasons as the O's backstop and made the All-Star team three times. He hit 30 homers in 1958 to become the second AL catcher in history to hit that many in a year. He finished his career in 1965 after some time with the Phils, Tigers, and Astros.

In 1960: He raised his average fifty points from 1959 but his power began to wane (12 homers) and he was not selected as an All-Star after having that honor for three consecutive years.

Off The Charts: Triandos, who Bill James called the slowest player of the decade of the 50s, legged out an inside-the-park homer on August 31, 1957, in Memorial Stadium. The story goes that he hit the ball so hard it ricocheted past Ted Williams in right field and by the time Ted tracked it down Gus had crossed the plate standing up. Triandos' SABR bio, an otherwise wonderful read btw, gets the stadium wrong.

The Card: The cartoon informs us that he led all AL catchers in putouts in 1958. That means there were a lot of plays at the plate. Given the state of the Orioles staff at that point, it's not a surprise.
Posted by Commishbob at 6:30 AM