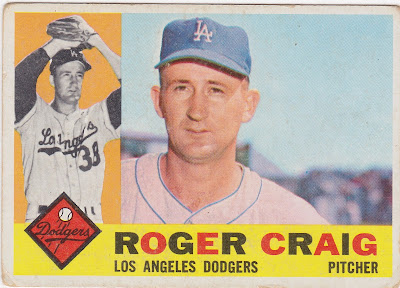 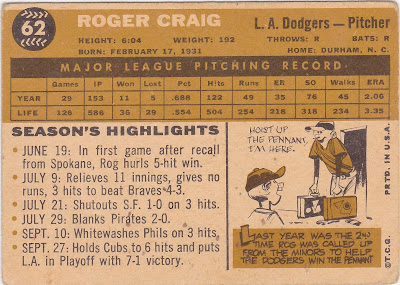 Career: Craig had a nice four-year spell in the minors and a two-year military break before he debuted with the '55 Brooklyn Dodgers. He pitched seven years for them, on both coasts. Later he pitched through 1966 for the Phils, Cardinals, Mets, and Reds. He lost 20+ games for the Mets in each of their first two seasons which doesn't help his sub-.500 career win percentage. He almost split his appearances evenly between starts and the bullpen over the course of his career. He got MVP votes in 1959 when he won 11 games with four shutouts after being brought up in June.

He pitched in four World Series and won three of them. He later was a longtime pitching coach and had a 10-year managerial career with the Padres and Giants. His SF team won a pennant in 1989.

In 1960: He was coming off his best year and had 8 wins but his other numbers had begun to edge upwards which is why he was allowed to go to the Mets in the expansion draft a few years later.

Off The Charts: He became associated with the split-finger fastball as a pitching coach and is sometimes credited with inventing it. Craig set the record straight: “People think I invented that,” Craig said. “I did not. Bruce Sutter did. I just found a way to teach it and it worked out.”

The Card: It's an oddly cropped photo. I get the feeling that this was a multi-player picture and this was how it had to be cropped to include only Craig. My guess on the locale is Wrigley Field. But I say that with not much confidence.

The cartoon references his second-half contributions to the Dodgers' 1959 championship season.
Posted by Commishbob at 10:55 AM