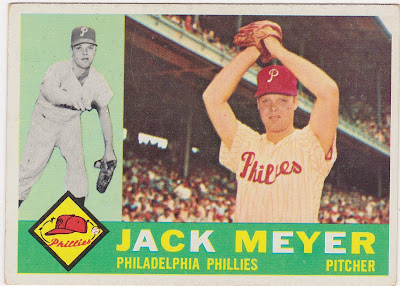 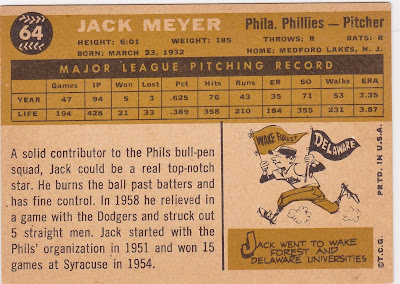 Career: Meyer was a Philadelphia-area native and had a very successful rise through the Phils' organization as a starter before making the club in 1955. He was used chiefly as a reliever that season (as he was the rest of his career) and he led the NL with 16 saves.  He finished second to Bill Virdon in the RoY voting.  He never matched that rookie season and his career, beset by injuries and other issues, ended with a few innings for the Phils in 1961. He died of heart problems in 1965 at the age of 35.

In 1960: He was coming off a busy '59 season but was able to make only a few appearances through May before he was sidelined.

Off The Charts: If Wikipedia is to be believed...[Meyer's] career was negatively affected by his growing reputation as a drinker and late-night carouser. He was a member—with fellow pitchers Turk Farrell and Jim Owens—of the so-called "Dalton Gang", who received notoriety around baseball for multiple, and well-publicized, off-field incidents.

The Card: Looks like a nice crowd at Connie Mack was in attendance the day this picture was taken. It's unusual that a card shows so many folks in the stands since the pics seemingly were taken long before game time. My original copy of this card had a serious crease and this upgrade came my way just a few weeks ago at a card show.

Posted by Commishbob at 9:38 PM