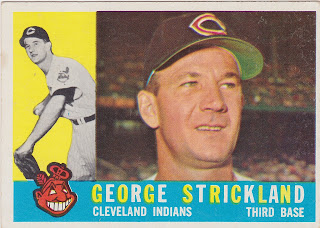 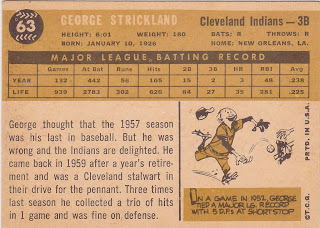 Career: He was a good-field, no-hit shortstop for ten seasons with the Pirates and Indians. He did have one nice year with the bat hitting .284 in 1953, his first full season in Cleveland. He appeared in three games in the 1954 Series against the Giants but went hitless in nine at-bats. He led the AL shortstops in fielding in 1955.

In 1960: He was at the end of his career but made the club due to an injury to Woody Held. He was on the bench for most of the summer and was released early in August. He had hit .167 in 32 games as a fill-in at short and third.

Off The Charts: According to SABR.."After his playing career ended, Strickland scouted for one year and coached for ten with the Indians, the Minnesota Twins, and the Kansas City Royals. In 1964 he became the first New Orleans native to manage in the majors when he filled in for an ailing Birdie Tebbetts."

The Card: The blurb mentions that he had been retired for a year before returning to the Indians in 1959. It's a nice combo of colors and it's a three-color combo at that.
Posted by Commishbob at 12:15 AM