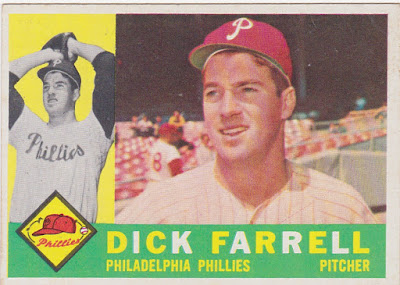 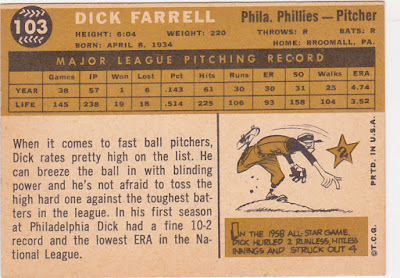 Career: Turk Farrell was a four-time NL All-Star who pitched for 13 seasons, mostly in Philadelphia and Houston. He spent part of the 1961 season with the Dodgers. Of his nearly 600 appearances 134 were starts, mostly coming with the Colt 45s/Astros. He had a reputaion as a 'hard living' guy. He moved to England after he retired to work on an offshore rig. At 43 he was killed when his motorcycle was hit by a drunk driver.

Off The Charts: In 1962 Farrell became one of eight pitchers selected to the All-Star squad while going on to 20 losses in the same season

The Card: Red seats, pinstripes...it's Connie Mack Stadium. That appears to be #28 behind Farrell which would be Curt Simmons.  I wondered why a vet wouldn't get a 'Season's Highlights' list but checking his stats shows that 1959 was an off-year for him after pitching pretty well in 1957-58. He did get what appears to be a Jack Davis cartoon though.
Posted by Commishbob at 4:06 PM