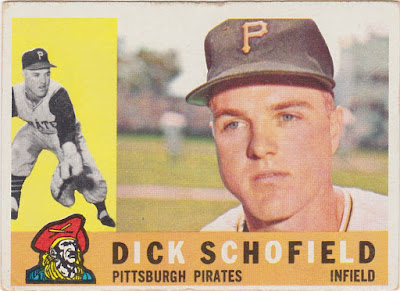 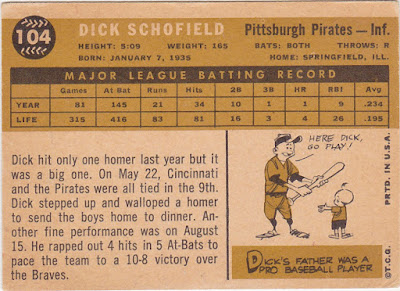 Career: Known as 'Ducky' he played 19 years for seven clubs. He spent most of his career as a utility infielder but was the regular shortstop for the Pirates and Giants from 1963 thru 1965. He was a part of two NL championship teams, the Pirates in 1960 and the Cards in 1964. His son, also 'Dick' played for 14 years in the majors and his grandson, Jason Werth, played for 15. All three of them were with the Dodgers at some point in their career.

Off The Charts: The Schofield/Werth family is one of five to have three generations play in the majors. The others are the Bells, Boones, Colemans, and Hairstons. John Schofield, Ducky's father, played minor league ball through the 1930s.

The Card: I really like the color combo here. It complements the Pirates' colors.
Posted by Commishbob at 8:00 AM