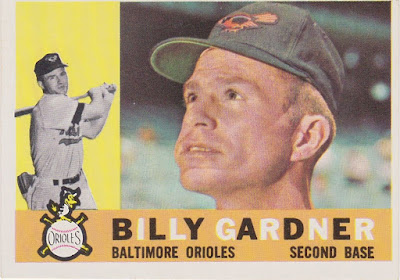 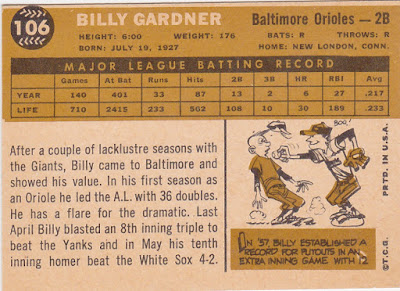 Career: Gardner played 19 seasons in the bigs, five as a regular and four of those with the Orioles thru the late 1950s. He had a career .237 average and his best season came in 1957 when he led the AL with 36 doubles (as well as in at-bats and plate appearances). He played with two Series-winning clubs, the Giants in 1954 (his rookie year) and the 1961 Yankees. He did not appear in the '54 Series but he made the box score in the '61 Series with one AB.

He later spent five seasons managing the Twins and a short stint as a replacement for Dick Howser in Kansas City when Howser had to undergo cancer treatment.

Off The Charts: His son, Billy Gardner Jr, has been involved in baseball as well and is, at last look, working as the roving coordinator for the Nationals.

The Card: There's that yellow, orange, black and white pattern again. Looks as good with the Orioles as it does with the Pirates.
Posted by Commishbob at 2:56 PM