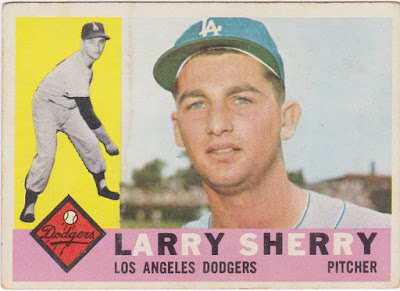 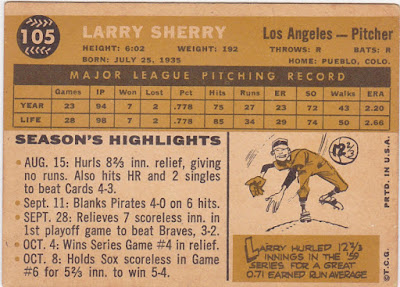 Career: Larry Sherry came up thru the Dodgers' chain as a starting pitcher but was converted to relief when he made the majors and became a front line player in 1959. His older brother Norn was a catcher with the Dodgers for much of Larry's tenure. Larry pitched in four of the six World Series games in '59 as the Dodgers beat the White Sox. He allowed only one earned run in his 12+ innings and recorded two saves and two wins. Needless to say, he was named Series MVP. After six years with the Dodgers, he was dealt to the Tigers where he continued his role as stopper. He finished his career with the Astros and a brief stop with the Angels in 1968. He was a pitching coach and minor league manager after his playing days.

In 1960: Coming off his sterling Series showing Sherry had one of his better seasons, winning 14 games and garnering some MVP votes.

Off The Charts: On May 7, 1960, Norm Sherry hit a home run to give Larry a win over Philadelphia.

The Card: Yellow, pink, black, and white looks better than it sounds as a card color combo. I get a Wrigley vibe from the bit of background in this shot. I wouldn't bet on it though.
Posted by Commishbob at 10:33 PM