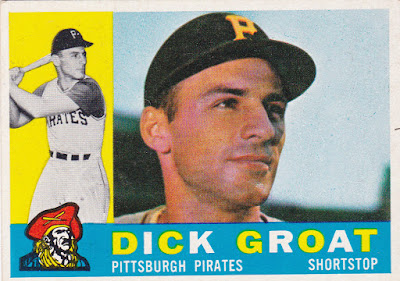 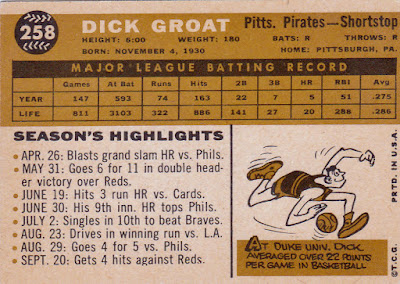 Career: Dick Groat's baseball career ran alongside his basketball career for a while and both of those came after his top-notch collegiate career at Duke. Well, maybe it was sort of the other way around. I dunno. What I do know is that Groat was a multi-sport star at every level. He was an All-American and National Player of the Year for the Blue Devil hoops team in his senior season of 1951-52. He was a first-round pick of the Fort Wayne Pistons and played one season before the money available in baseball turned him away from what was his favorite sport.

Branch Rickey signed Groat for the Pirates in 1952 as soon as he finished his 4-year athletic commitment to Duke. Rickey had attempted to sign him the previous summer but Groat was intent on finishing at Duke and took a handshake promise from Rickey that he would sign the following summer. He did.

Groat went straight to the majors and played almost a hundred games that first year. He hit .284 and was third in the RoY balloting. After a stint in the service, Groat returned to the Pirates and played short, next to Bill Mazeroski through 1962. Along the way, he won a ring with the Bucs in 1960.

He was traded to the Cardinals in 1963 and won another ring the following year as the Redbirds beat the Yankees. During his career he was an ironman, rarely missing a game and making five NL All-Star teams.

Groat, finished his playing career with some (very) short stays with the Phils in 1967. After retiring he built and managed a gold course with former teammate Jerry Lynch. He was the color commentator for Duke basketball for 40 seasons until he left the job in 2019.

In 1960: Not a bad year for Groat, all-in-all. He won the first of his World Series rings and made the All-Star team. Groat also won the National League Most Valuable Player. He slashed.325/.371/.394 with 32 extra-base hits, including 26 doubles, four triples, and two home runs. On the defensive side of things, he lad the league in Defensive WAR and some other stat geek categories like Total Zone Runs.

Off The Charts: Lots of fun Groat trivia and stories floating around. Here are a few from online newspaper stories, Wikipedia, and SABR:

“I only was allowed three cuts at Duke,’’ Groat says. “My father would have killed me with the grades I had if I hadn’t graduated from Duke.”

The colorful Zollner, perhaps the richest NBA owner at the time who became the first in the league to purchase an airplane to charter the Pistons to games cut a deal with Groat through GM Carl Bennett. They offered to provide a private plane to fly Groat back and forth to Duke from wherever the Pistons played so he would not miss another class.