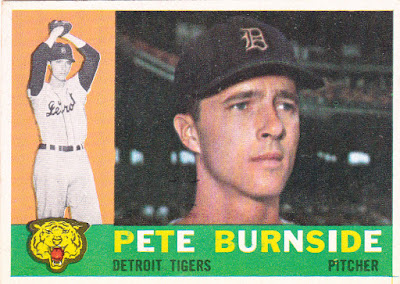 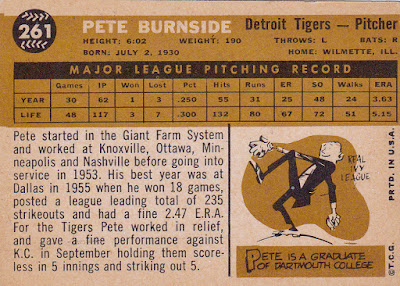 Career: Burnside was a high school phenom who wowed the scouts with a blazing fastball. His control, however, was another matter. He never quite got a handle on where his ball was going. And too frequently it went over the fence.

He'd signed with the Giants in 1949 but his road to the majors was a bumpy one. His results never matched his talent and he suffered a few injuries and got detoured by Uncle Sam. He finally stuck with the Giants in 1957 but two rough years later he was traded to the Tigers.

Burnside still had that tantalizing arm strength but his results never matched it. He pitched for the Senators, Orioles, and in Japan for a few seasons without ever having much success.

In 1960: After a season in the Tigers pen, he was given a shot at starting. He started 15 of his 30 games and went 7-7. That win total was the best of his career. His other numbers were pretty lackluster and the Tigers let him go in the expansion draft.

Off The Charts: Coming out of New Trier High School in Winnetka, Illinois Burnside was sought after by the Cubs, his favorite team. But Burnside wanted to attend Dartmouth College and the Cubs didn't sign him. He was offered (and accepted) a deal by the Giants that allowed him to attend school and report to the team when his spring semester ended. In 1952 he graduated with a double-major in history and sociology.

During his time in the service, pitching for the Fort Leonard Wood (Missouri) Hilltoppers in October 1953, he gained national attention by striking out the first 17 batters in an inter-service game.

After his two seasons in Japan ended he returned to Illinois, got his Masters at Northwestern, and began his second career as a teacher and coach at New Trier. He retired from there in the early 90s.