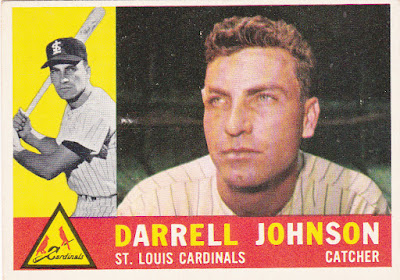 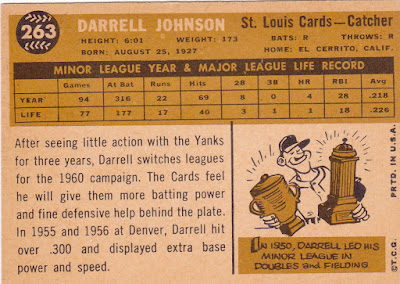 Career: Johnson's major league career came in bits and pieces spread over a decade for six different teams. He came out of Nebraska-Kearney and he caught in the St. Louis Browns' system beginning in 1949. He made their roster in 1952 but from there it was a journey through Chicago (Sox), New York (Yankees), back to St. Louis (Cardinals), Philly, Cincinnati, and Baltimore.

Johnson's numbers through all that don't add up to full seasons worth of games but he learned a lot and it came in handy when he managed three teams later in life. He logged nearly a thousand games in the minors, was a player/coach for the Cardinals, and went on to manage the Red Sox (winning the '75 pennant), the Mariners (he was their first), and finally, briefly, the Rangers.

He was a career .234 hitter with one homer off Virgil Trucks and another one off Johnny Podres.

In 1960: Johnson started the season as a spare catcher and coach. When the Cards recalled top prospect Tim McCarver they took Johnson off the active roster and he was officially a coach for the rest of the year. He'd had just twenty-six at-bats over eight games hitting .154 with an RBI.

Off The Charts: Johnson ended his playing days with the Orioles and then began managing in their chain. He was pushed aside by the Rochester owner in favor of Earl Weaver and he moved on to scouting with the Yanks and then got back into managing. He took over the Red Sox job in 1974, finished third, and then took them to the Series.