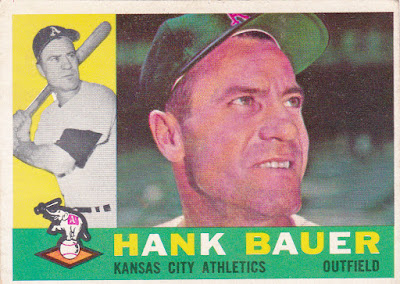 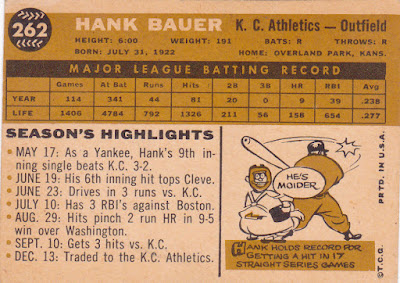 Career: Bauer, whose reputation as a tough ex-Marine is widely known, had a 14-year playing career, twelve of those seasons were with the Yankees. His career peaked with the powerhouse early-to-mid 50s Yankees clubs and Bauer was an All-Star from 1952 through 1955. He picked up MVP votes in five straight years beginning in 1952 as well.

Bauer played in nine World Series with the Yanks, winning seven including five straight from 1949 to 1953. He is sixth on the list of World Series at-bats and hit seven Series homers including four in the '57 Series. The card's cartoon mentions the fact that Bauer holds the record for hits in consecutive World Series games. He still holds the record. His streak included 1956 WS games 1-7, 1957 WS games 1-7, and 1958 WS games 1-3. warren Spahn's two-hit shutout of the Yanks in Game Four of the '58 Classic ended Bauer's run. He got the last laugh though, as he homered off Spahn in his first at-bat in Game Six and he got his ring in the end.

He finished his career with the Athletics in '60/'61. He was the As' player/manager for part of his final active season.

Bauer managed the A's in both KC & Oakland, as well as the Orioles and he won another ring when the '66 Birds swept the Dodgers.

There is a lot more to the Hank Bauer story than I can include here so I'll point you to his SABR bio for a long but entertaining read.


In 1960: Bauer came to the Athletics in the December '59 trade that sent Roger Maris to the Yankees. He got into 95 games and hit a respectable .275 which is right about his career average.

Off The Charts: Bauer's WWII Marine story as told by Wikipedia...


One month after the Japanese attack on Pearl Harbor, Bauer enlisted in the U.S. Marine Corps and served with the 4th Raider Battalion and G Company, 2nd Battalion, 4th Marines. While deployed to the Pacific Theater, Bauer contracted malaria on Guadalcanal, however he recovered from that well enough to earn 11 campaign ribbons, two Bronze Stars, two Purple Hearts (for being wounded in action) in 32 months of combat and the Navy Commendation Medal. Bauer was wounded his second time during the Battle of Okinawa, when he was a sergeant in command of a platoon of 64 Marines. Only six of the 64 Marines survived the Japanese counterattack, and Bauer was wounded by shrapnel in his thigh. His wounds were severe enough to send him back to the United States to recuperate.

Hanks's next-to-last career homer was an inside-the-park job off his pal, Whitey Ford in June of 1961 at Yankee Stadium. I bet they laughed about that one over beers a time or two. Baseball-Reference's home run log says it was hit to 'deep' centerfield. In Yankee Stadium that likely means it rolled to the monuments.

The Card: Topps had their artist paint the A's logo on to Bauer's cap but so little of it is visible on the color shot you wonder why they bothered.
Posted by Commishbob at 6:30 AM