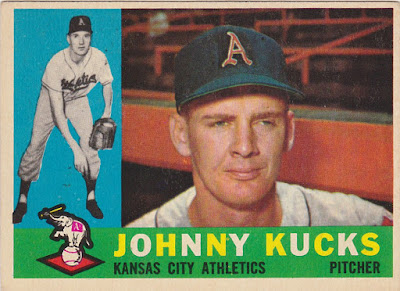 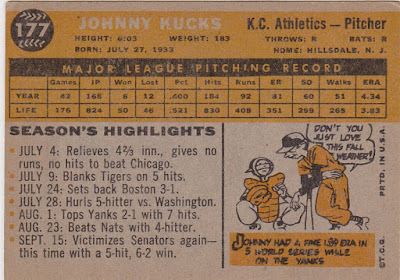 Career: Kucks was a Yankee product who won 42 games in the Bronx from 1955 until he was traded to the A's in 1959. 1956 was a career year for him as he won 18 games and was selected to the AL All Star Squad. He pitched in four World Series for NY, winning two rings.

In 1960: This was his final big league season. He opened in in the A's bullpen and moved into the rotation in June. He put up some ugly numbers that year but he managed to pitch three more years in the minors before retiring for good.

WikiFacts: "In 1956, Kucks was in just his second season with the Yankees and was not expected to be part of the starting rotation; he went 8-7 the previous year as a spot starter and reliever.

But when other pitchers faltered, he became the Yankees’ second-most reliable starter, behind Whitey Ford. He won 14 games before the end of July, making the American League All-Star team, and finished the season 18-9, with a shutout of the Chicago White Sox on 73 pitches on Aug. 24.

Still, he was something of a surprise choice to start the seventh game of a World Series. Kucks had faltered in September, and when he had been called on to pitch in relief against the Dodgers in the first two games, both of which the Yankees lost, he had not fared well. Moreover, Ford was available, having won Game 3 four days earlier.

But Kucks pitched brilliantly, giving up just three singles as the Yankees clubbed four home runs and won easily, 9-0. Sixteen of the 27 Dodgers outs were recorded on ground balls. Just two fly balls made it to the outfield."   -Kuck's New York Times obit, 11/1/2013

The Card: I'm puzzled by the photo used on this card. First things first...it's hard to tell if this shot was been airbrushed. Kucks came over to Kansas City with four months left in the season so he had the opportunity to pose in his A's gear. The cap may or may not show airbrushing but it would be out of character for Topps' artists to paint in the jersey piping or the hint of the A's sleeve patch. So we'll give them the benefit of the doubt and say it's Kucks in his A's uni.

I would normally look at the red railings and assume that the setting was Seals Stadium in San Francisco but when would Kucks have been there? He was an American Leaguer his whole career and whether that is an airbrushed photo or not neither the A's or Yanks played in San Francisco in 1958 or 1959. The A's played in Connie Mack Stadium in Philadelphia prior to moving to KC for 1956 and it could be Kucks as a Yankee in an airbrushed card but Connie Mack had many red seats, not railings. One other possibility is Milwaukee County Stadium. Maybe Kucks posed there during the '57 or '58 World Series while he was with the Yankees. But that place also had some red seats along with red railings, at least in the photos I see.

I can't find any shots of Fenway, Tiger Stadium, Comiskey Park or Memorial Stadium that match either. Nobody else cares but I'm going to do some more research on this one.
Posted by Commishbob at 9:02 AM