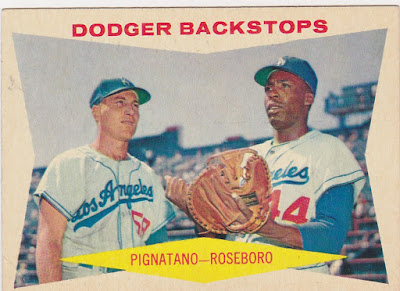 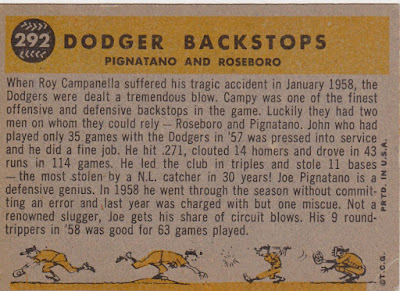 The Card: Posing at Seals Stadium in San Francisco we have Joe Pignatano and Johnny Roseboro. As the card states Roseboro took over behind the plate for the Dodgers with the burden of attempting to fill the void following the car wreck that disabled Roy Campanella. He held the job for a decade and was a standout, winning a couple of Gold Gloves and making two NL All Star squads. He finished his career with the Twins and Senators.

Joe Pignatano had backed up Roseboro in 1959 but in 1960 he slipped from #2 on the depth chart to #2b behind Larry Sherry. In 1961 he found himself with the Athletics and had his best season stats-wise while still playing part-time. He moved on the the Giants and finished his playing career with the '62 Mets. He coached on the Mets' staff for many years after his playing days.

This is a '59 picture as that was the first season the Dodgers had 'Los Angeles' on their road shirts. That remained the caes for about a decade until they adopted home and road jerseys with 'Dodgers on the front. The city designation returned in 1999.
Posted by Commishbob at 5:25 PM