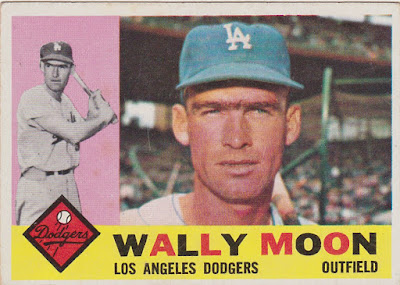 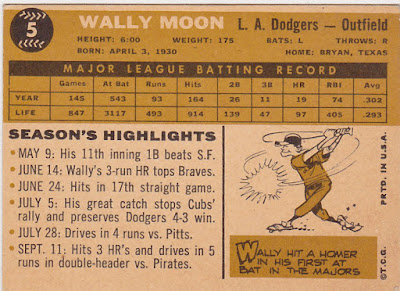 Career: Moon played for 12 seasons in the majors, the first five coming with the Cardinals. He was the 1954 Rookie of the Year in the NL, beating out Ernie Banks and Hank Aaron. He went on to win a World Series ring with the '59 Dodgers, garner a Gold Glove, twice appear on the NL All Star squad and finish fourth in the 1959 MVP voting.

In 1960: This was his second season with the Dodgers and his numbers were just a tick below what they had been in 1959. He led the NL is fielding among left-fielders and earning his Gold Glove.

WikiFacts: "He came to the big leagues in 1954, playing as a regular. The story is that he mistakenly showed up at the major league camp in spring training instead of the minor league camp, and the Cardinals kept him; in fact he had been playing winter ball in Venezuela and his team, Pastora de Occidente made it to the 1954 Caribbean Series finals. As the minor league camp was about to wind up, General Manager Dick Meyer gave him the option of going straight to the major league camp, although manager Eddie Stanky was not aware of the deal. For his part, he had told himself that either he won a job with the Cardinals or he would quit, returning to Arkansas with his wife and children to take up a teaching job that was offered him. But he impressed enough in spring training that not only did he make the team, but the Cardinals decided to trade veteran Enos Slaughter and make him the starter in right field." -Moon's Baseball Reference Bullpen page

Wally Moon has a website: The Official Site of Wally Moon

The Card: 1960 Topps doesn't get much better than this, at least to me. BP portrait shot of Moon, who's face has a lot of character. Pink block holding his 'action' shot. An informative cartoon and it's all printed on the lighter, cream colored cardboard. Boom.

Posted by Commishbob at 3:04 PM