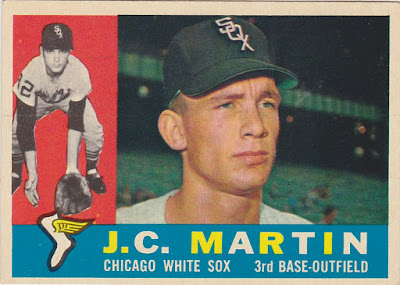 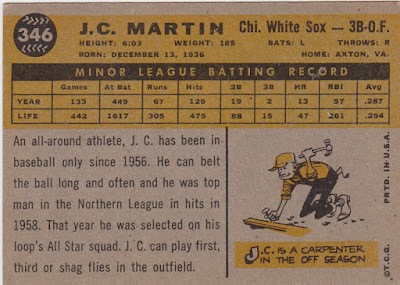 Career: He was originally an infielder/outfielder. After a couple of late season appearances Martin made the transition to catching and stuck on the Sox roster in 1961. He ended up playing nearly as much as starter Sherm Lollar. He was back in the minors for most of '62 and then served as the White Sox on again/off again starter for five seasons. He shared duties with John Romano for much of that time. He played for the Mets for a couple of seasons and won a championship with them in 1969. He got a pinch hit in his one playoff at-bat that year and was involved in a controversial play in the World Series (see below). And then it was back to Chicago and three years of spot duty with the Cubs. He remained in Chicago as a coach for the Cubs and TV analyst for the Sox.

In 1960: Martin had a nice season for San Diego in the PCL before he was called up to the White Sox in September. He got 20 at bats in seven games and picked up a pair of hits.

WikiFacts: "In Game Four of [the 1969] Series, his Mets leading two games to one, Martin was involved in a controversial play. With the game tied 1–1 in the bottom of the 10th and pinch-runner Rod Gaspar on second, Martin, again pinch-hitting for Seaver, bunted to the mound and, while running to first, was hit on the arm by Pete Richert’s errant throw, the error allowing Gaspar to score the winning run. Replays later showed that Martin had been running inside the baseline, which could have resulted in him being called out for interference. The umpires said they did not make the call, however, because they felt Martin did not intentionally interfere with the play. As a result of this play, the running lane that extends from halfway down the first-base line to the bag was added to all major league fields. A runner can be running in this lane and be hit by a thrown ball and not be called for interference."  -Wikipedia 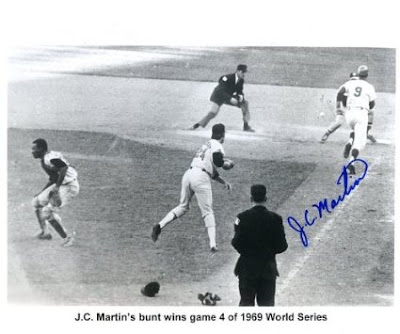 The Card: I assumed Martin was always a catcher. The card showed me otherwise. This is one of the better color combos. . The Sox' fantastic 'flying sock' logo matches the lettering nicely. It was interference, dammit.

As noted in the intro Gary Peters picture was used for this card. J.C. Martin's photo was used on Peters' card. The error was not corrected.