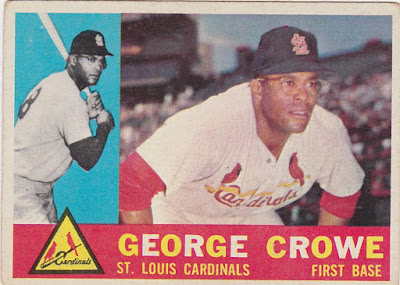 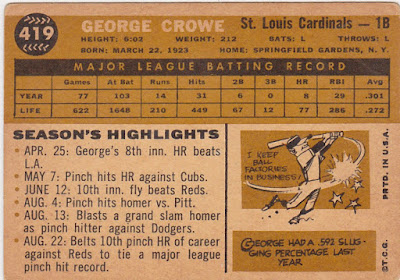 Career: A prep basketball star, Army vet and veteran of the Negro Leagues Crowe was 31 before he made his major league debut in 1952. He had his best season in 1957 with the Red Legs when he smacked 31 homers with 92 RBI and a .271 average. That homer total is more than double his output in any other season. His only All Star season was 1958. He was hitting over .300 at the All Star break that year but his numbers tumbled after that and he never regained that level.

In 1960: Nearing the end of his career Crowe was used mostly as a pinch hitter accumulating 72 at bats. He played briefly the next year and then finished the season in the minors as a player/coach.

WikiFacts: Crowe's story is an interesting one and his SABR bio is worth the read. Here is a bit of it that discusses his post-baseball life:

Away from sports, Crowe was adrift. He sold life insurance, worked for Pan American World Airways in California, and then returned to New York to teach physical education and coach the freshman baseball team at a high school. He and his wife divorced. When a doctor told him he was developing an ulcer, he blamed the stress of trying to teach kids who weren’t interested in learning.
As he reached his fiftieth birthday in 1971, Crowe dropped out. He moved to the back side of beyond, to the foothills of New York’s Catskill Mountains. His home, near the hamlet of Long Eddy, was a log cabin he called "The Jackass Inn," seven miles from the nearest paved road. It had no heat, electricity, running water, or telephone. The only way to his front door was a long hike up a rocky slope. Some described him as a hermit, but he stayed in touch with family and friends and was willing to talk to any reporter who took the trouble to find him.
Crowe lived as a mountain man for more than 30 years. "In these hills I’m free," he told a visiting writer. "I don’t have to punch anyone else’s time clock. I was sick of people and all the nonsense of our society." Although he had enjoyed hunting and fishing, he became a vegetarian for a while, growing most of his food. He stopped drinking and gave up white flour and sugar. The powerful athlete morphed into a skinny old man with a white beard. "Here, I make my own rules," he said. "I look at birds when I want to, eat all the raw fruits and vegetables I want, don’t have to chew tobacco any more to calm my nerves and think any way I want. Now I can honestly say, ‘Crowe isn’t anyone’s slave anymore.’"

The Card: I'm happy to see a '60 Topps that shows more than a head shot. Crowe is posing in Seal Stadium for this one. It's also nice to have a cream colored cardboard card with the 'bulleted' Seasons Highlights. Looks like he had a pretty nice month of August.
Posted by Commishbob at 7:00 AM