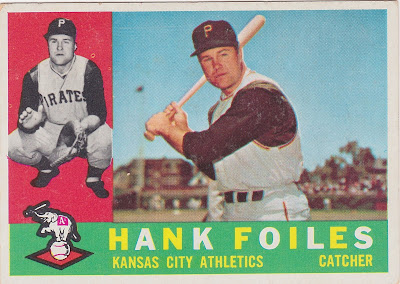 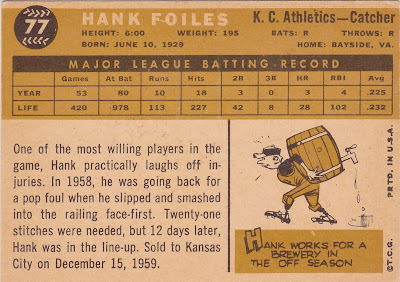 Career: Foiles is one of the most interesting guys I've come across while researching these team sets from the late 50s/early 60s. He was a career back-up catcher for seven teams and, while he only had 300+ at bats twice, made the 1957 All-Star squad. He was also a bit of a renaissance man having authored a book, done a lot of public speaking and sued the Orioles (booo!) for using his photo without permission in a stadium giveaway card set. The link a bit lower that goes to my '59 set blog will lead you to much more on this interesting (and very much alive) character.

Off The Charts: From my 1959 Topps blog posting of his card that season: "He was on the roster of four clubs during the 1960 season. Traded after the '59 campaign by the Pirates to the A's he was traded back to the Pirates in June of '60. But Foiles was to be assigned to the minors and he refused. The Pirates allowed him to engineer his own trade so the next day he was dealt to the Indians. In late July Foiles was traded again, this time to the Tigers. To add to the fun he was drafted after the season by the Orioles. So, to sum it up... between December of 1959 and November of 1960 Foiles followed this path: Pirates->Athletics->Pirates-Indians-Tigers-Orioles!!!"

The Card: Foiles is pictured in his Pirates gear in Wrigley Field but, as noted above, he was on tour within the American League when this card was new. But, in any case, it's a beauty. I love the color combo and the posed shot with Wrigley and pregame activities as a backdrop. His trade to the A's is noted in the write-up.
Posted by Commishbob at 8:54 PM