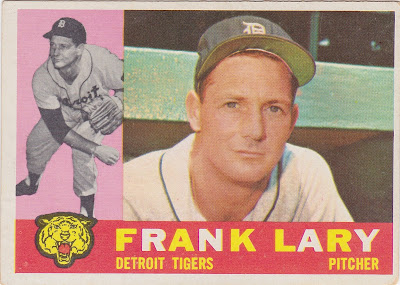 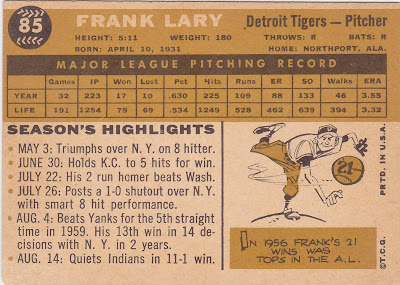 Career: Frank Lary came to the Tigers after a couple years in the service and in their farm system. He was a double-digit winner from 1955 through 1961. He was a workhorse who led the league in starts and innings on several occasions and in wins with 21 in 1956. He was a two-time All-Star, a Gold Glove winner and he finished third in the Cy Young voting in his 23-win-season of 1961.  A leg injury he suffered on Opening Day in 1962 led to arm woes that killed his effectiveness and he finished his career scrambling for wins with the Mets, Braves and White Sox before his retirement.

In 1960: He finished 15-15 but a lot of that was due to the Tigers poor season. The numbers show that he was much better than his W/L and he made the All-Star team.

Off The Charts: He was called 'The Yankee Killer' due to his dominance over the Bronx crew. I once asked my father if he hated Lary and another guy with a reputation of beating the Yanks, Charlie Maxwell. He said 'No, it just means the Yanks are good. Nobody cares who kills the Senators.' Point taken. BTW...he was 28-13 against New York. That is by far his best record against any opposing team.

The Card: this dugout photo could be from almost any AL stadium. Odds are it's NY but that is by no means a given. Three of the highlights listed for 1959 come against the Yankees and the August 4 entry notes his mastery of them.
Posted by Commishbob at 3:14 PM