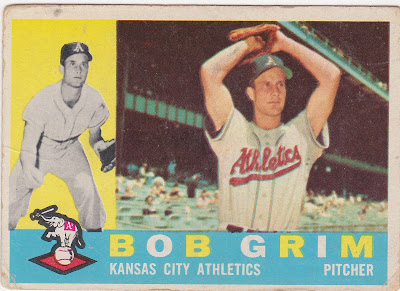 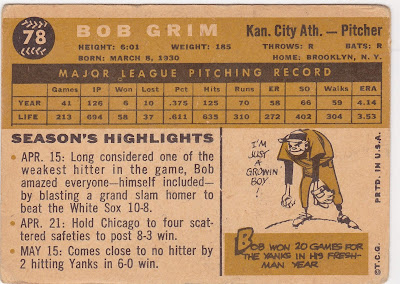 Career: Grim was signed by the Yankees and spent four seasons in their system before serving two years in the military. He was the AL Rookie of the Year in 1954 winning 20 games for the Yankees. He developed arm issues but managed a brief comeback in 1957 when he won 12, led the AL with 19 saves, and made the All-Star team. After that, he was never the same pitcher. He bounced around with several other teams and ended his career back with the A's (briefly) in 1962.

In 1960: He started the year with KC but had his contract sold twice, first to the Indians and then to the Reds. He went 3-3 in 44 games overall.

Off The Charts: Wikipedia reports that [Grim] took the loss in Game 4 of the 1957 World Series when he allowed a walk-off home run to Milwaukee Braves third baseman Eddie Mathews.

The Card: Love the first entry on the highlights list. Topps could get a touch snarky when they wanted to. This is the second consecutive KC player on the set checklist following Hank Foiles who also played for three clubs that season. My copy is a bit the worse for wear but it may not be quite upgrade worthy.
Posted by Commishbob at 10:00 AM