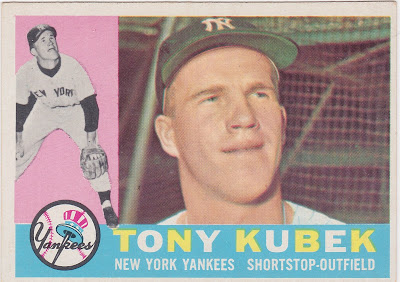 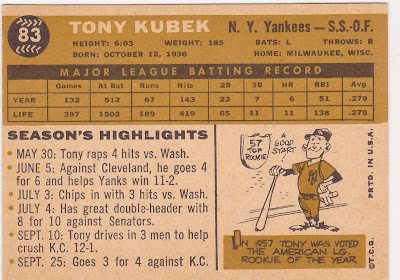 Career: Tony Kubek was the AL Rookie of the Year for the Yankees in 1957 and he played for nine big league seasons, all in NY. He was a three-time All-Star and won three rings in six World Series shots with the Yanks. He received much notoriety when a bad-hop grounder off the bat of Bill Virdon in the 7th game of the 1960 Series struck him in the throat allowing Virdon to reach and the Pirates to rally and win on Mazeroski's famous dinger.  He retired at 29 due to a neck injury that threatened to cause permanent damage. He spent almost 30 years as a broadcaster for the Jays, Yanks, and NBC.

In 1960: He had comparable numbers to his All-Star seasons but didn't get the nod. His 14 homers were a career high.

Off The Charts: From Wikipedia...In Game 3 of the 1957 World Series, he had one of the best World Series games a rookie has ever had, going 3 for 5 with two home runs, three runs scored, and four RBI.

The Card: A pink element and highlights bullet list are plusses.
Posted by Commishbob at 4:43 PM