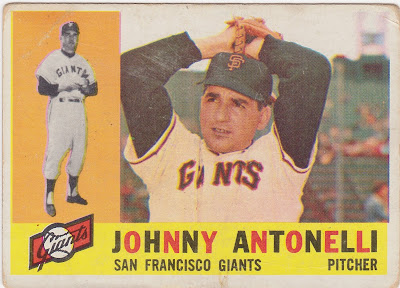 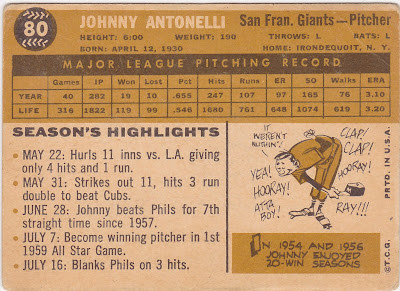 Career: He began and ended his career with the Braves. In between, he made a name for himself in New York as the Giants' ace in their 1954 championship season. In that '54 run, he won 21 games and led the league with a 2.30 ERA and 6 shutouts. He had a complete game win and a save in the Series against the Indians.

In total, he won 126 games and made five NL All-Star squads.  Post-baseball he owned and operated a string of Firestone outlets around his Rochester, New York home region.

In 1960: He was nearing the end of the line and had issues with both his performance and Giants management. He had a strong start to the year but by seasons' end he was out of the rotation and soon was traded away.

Off The Charts: I found this little tidbit in an MLB.com post about him: "Antonelli was selected* by the expansion 1962 New York Mets, which would have brought him back to the Polo Grounds. But he was tired of traveling and had already started a thriving chain of Firestone Tire stores, so he turned down the offer and retired."

*Baseball Reference has him being purchased by the Mets, not as part of the draft itself.

The Card: Not a bad card but I'd have liked a different color than orange for the 'action' picture background. And it's another one where Topps cropped the main photo oddly giving it an off-center look.
Posted by Commishbob at 10:56 AM