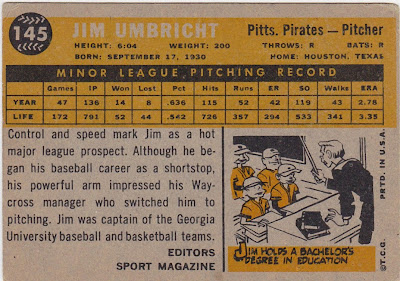 Career: Umbrict was a star athlete at the University of Georgia and also served in the military before becoming a major league reliever. He got one start for Pittsburgh at the end of the 1959 season and then made the 1960 Pirates club. He pitched in parts of that and the following season and then was taken in the expansion draft by the Colt 45s. In Houston he found a home in the bullpen and went 8-3 with very good numbers. Sadly he lost a battle with Lymphoma on the eve of the 1964 season. Houston named their MVP award for him and his number is retired by that club.

In 1960: He made two April starts for the eventual World Champs but was roughed up in both. He worked primarily out of the bullpen after that with mixed results before being sent down at the end of June. He got a September call-up but wasn't on the Pirates World Series roster.

WikiFacts: "...he made his big-league debut when he was given the starting assignment against the Cincinnati Reds on September 26, 1959. Umbricht had a particularly memorable first inning, but not in a positive way, as leadoff hitter Johnny Temple, Frank Thomas, and Buddy Gilbert all took him deep for home runs. Umbricht stayed in the game and left in the seventh inning with a 6-5 lead, but the Reds won the contest with two runs in the bottom of the ninth. That was his only appearance for the Pirates that year,..." -from his SABR bio

The Card: Another from the very cool Rookie Stars subset. The card itself is a bit the worse for wear but it's nowhere near in need of an upgrade.