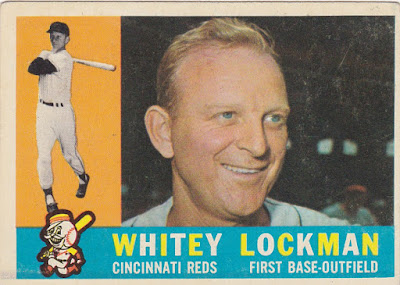 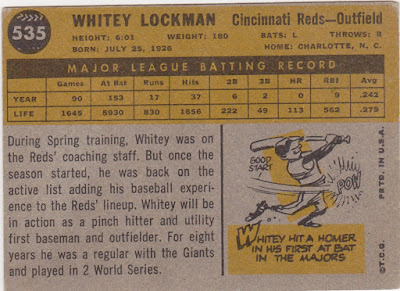 Career: Lockman spent 13 years with the Giants, first as an outfielder and then moving to first. Between 1948 and 1955 he was one of the Giants better hitters with double digit homers most seasons and an average running close to .300. He took and interesting detour to the Cardinals in a June trade to St. Louis in 1956. He was traded back to the Giants following that season.

He coached, managed (the Cubs in the early 70s) and held front office jobs after his playing career before finally retiring from the game after nearly 60 years in it.

In 1960: He'd come over from the Orioles in mid-summer of 1959 and he was released by the Reds in June of 1960 after just a handful of at bats to that point. He immediately joined the clubs' coaching staff.

WikiFacts: "Lockman, who played primarily for the New York Giants, was on second base when Bobby Thomson hit possibly the most famous home run in history, the ninth-inning “Shot Heard ‘Round The World” that won the pennant for the Giants in a 1951 playoff game with the Brooklyn Dodgers.

Lockman grew up in the Paw Creek area on the outskirts of west Charlotte. He played his first major league game in 1945 with the Giants, homering in his first at-bat while still just 18 years old." -from his obit in the Charlotte Observer

The Card: Whitey looks very happy in this shot taken at Yankee Stadium. He's in Orioles duds, you can tell by the piping and the Orioles cap on the player in the background. The write-up makes note of his serving on the Reds' staff in the spring.