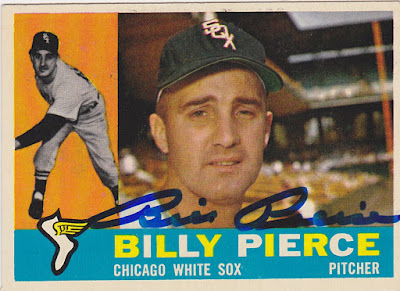 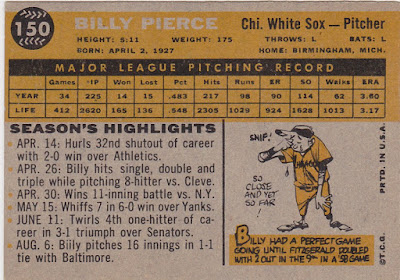 Career: Over 16 full seasons in the bigs Billy Pierce won 211 games and appeared in two World Series. He was a seven time All Star and finished third in the Cy Young voting in 1962 with the Giants.

In 1960: Pierce won 14 games and had a 3.60 ERA. A year removed from his three year string of leading the AL in complete games he had only 8 in 1960. He was clearly on the back side of his career but he was certainly not finished.

WikiFacts: "Crafty rather than overpowering, Pierce overcame his slight build to become one of top pitchers of his era. The White Sox retired his number 19 in 1987, and his image is proudly displayed on the outfield wall at New Comiskey Park. He has said that the best pitches in his repertoire were the fastball and slider.

The White Sox have remained an important part of Pierce's life since. He lives in the suburbs of Chicago and makes public relations appearances for the team. His name rang on the ears of modern fans after Mark Buehrle pitched a no-hitter in 2007, as the media recounted Pierce's four one-hitters and perfect game lost in the 9th inning.

The lefty was named to the White Sox "Team of the Century", and is applauded for his work both on and off the field." -from his Baseball Reference Bullpen page

The Card: Old Comiskey Park provides the backdrop for this one. Topps was branching out as far as photographers was concerned. In blogging the 1959 set I wasn't able to determine any Comiskey shots. This card comes from my Pierce PC. I'm going to try to pick up a few other signed copies of cards in this set. They add a little pizzazz.