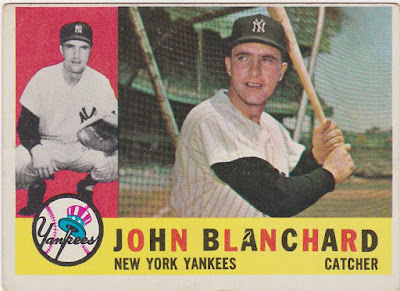 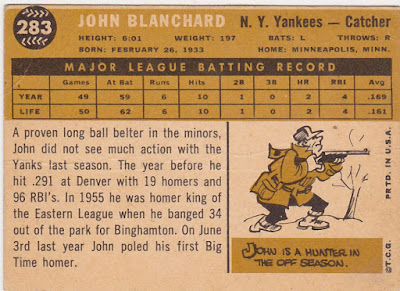 Career: Blanchard spent eight seasons in the majors, the vast majority as a platoon catcher, pinch hitter and spare outfielder with the Yankees. He won World Series rings with the Bombers in 1961 and 1962. His personal 'triple crown' came in 1961 when he hit 21 homers with 54 RBI and a .305 average in 243 at bats.

In 1960: He was still a spare part in his second full season in New York. He appeared in 53 games, had about a hundred plate appearances and hit .242 but he did go 5 for 11 with two doubles in the Series against the Pirates.

WikiFacts: "Blanchard appeared in the World Series 5 times for the Yankees and holds the Major League record with ten World Series pinch-hit at-bats. Blanchard was the catcher who called the pitch that Bill Mazeroski hit for the first-ever series ending home run off Ralph Terry in the 1960 World Series in which the Pittsburgh Pirates defeated the heavily favored Yankees." -SABR bio

The Card: This one features one of the better color combos and a posed, waist up shot which breaks up a long string of 'mug shots' in this set. The iconic Yankee Stadium facade brings back a lot of memories. Blanchard didn't have many highlights in 1959 so he gets a bio blurb instead of the bullet-ed list. I think he borrowed Elmer Fudd's coat for his cartoon pose.
Posted by Commishbob at 6:30 AM