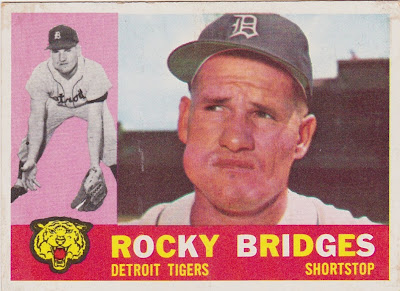 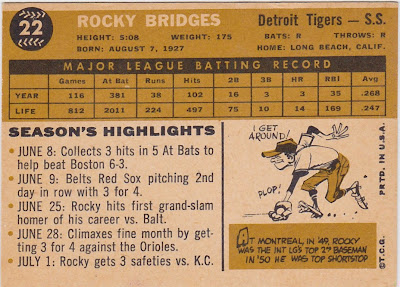 Career: Bridges came up through the Brooklyn Dodgers' chain and played 11 major league seasons for seven different clubs. He had a few brief runs as an everyday starter but was mostly a back-up platoon type guy. He had a career line of .247/.310/16/187. He made the 1958 All Star team as a member of the Senators. After finishing his playing career with the expansion Angels he had a long tenure as a coach and manager at various levels of organized baseball.

In 1960: He played for three clubs. He began the year with Detroit but barely played (injuries) and was traded to the Indians in July. The Cards purchased him in early September but he only made three appearances for them during what was an unsuccessful effort to make a run at the Pirates.

WikiFacts: Sports Illustrated noted in 1964 that Bridges was “one of the best stand-up comics in the history of baseball.”

The Card: I don't know if there is a card (or picture for that matter) of Bridges that shows him without a wad of tobacco in his cheek. I'm partial to pink cards but the pink and red with the yellow and white letters just isn't that attractive. My copy is in decent shape with some staining in the corners.
Posted by Commishbob at 7:30 AM