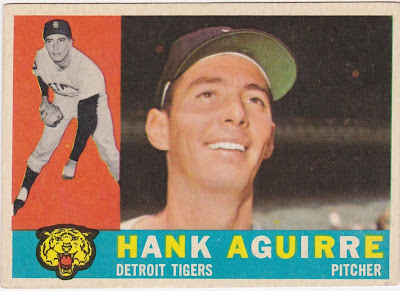 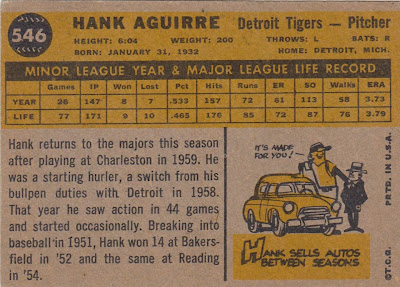 Career: In his 16 year career Aguirre spent four seasons as a starter for the Tigers and two others in which he split time about equally between the rotation and the pen. The rest of the time, including seasons with the Indians, Cubs and Dodgers, he was a bullpen fixture. He won 75 games and had 33 saves. His best season was 1962 when he won 16 games and led the AL in ERA, ERA+, WHIP and made the All Star team. He pitched three innings in the second of two ASGs that year and got a 'hold'.

WikiFacts: One of the worst hitting pitchers of all time Aguirre got one at bat in that 1962 ASG. Juan Marichal whiffed him. he had one career triple. It came in a game at Yankee Stadium which I witnessed. I detailed that day in my post of Aguirre's 1959 card.

The Card: Red, blue, yellow and white is a nice combo on these cards. This was part of my initial large lot purchase. It's typical of the condition of the cards I got, a bit closer to 'good' than 'fair'.

I'm partial to this card because of my 'connection' to Aguirre. He probably had that same grin on his face as he stood on third base that day in Yankee Stadium. Those same stands were behind him at that moment that day as well.
Posted by Commishbob at 7:00 AM