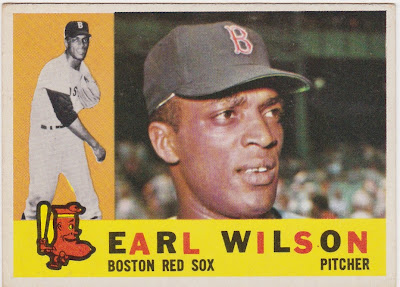 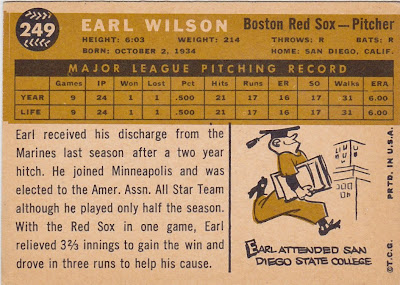 Career: Wilson had double digit wins in eight straight seasons from 1962 through 1969. He pitched for the Sox and Tigers for the bulk of his career but finished up with a half season in San Diego in 1970. He won 121 games with 21 being his best season total. He led the AL with that in 1967.

In 1960: Called up in July he had three shaky relief appearances before given a shot as a starter. He responded with back-to-back complete game wins. He got seven more starts before the season ended with mixed results, a 3-2 record and 4.71 ERA. He spent the following season in the minors before returning to the bigs for good in 1962.

WikiFacts: "Occasionally used as a pinch-hitter, he was a definite home-run threat any time he stepped into the batter's box. Wilson hit home runs for teams in each league in 1970 - it would be 38 years until another hurler, C.C. Sabathia, duplicated the feat. His 33 homers by a pitcher in the post-1960 expansion era stands as a record; as of 2014, Bob Gibson and Carlos Zambrano were tied for second at 24."

The Card: From time to time you come across cards from this set on which the letters in the player's name are uneven. This is one of them.The color scheme isn't repulsive and the condition is about f/g.