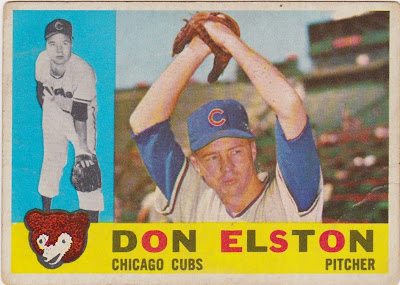 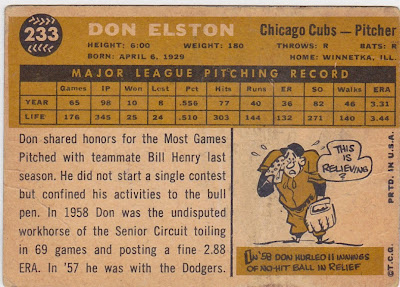 Career: Elston was a Cubs signee who debuted in 1953. He was traded to the Dodgers but after a minor league stint and one Dodger appearance in 1957 he was traded back to the Cubs with whom he finished his career.

WikiFacts: -from Baseball Reference:
"He made his debut on September 17, 1953, the same day Hall of Famer Ernie Banks also made his first major league appearance in the Cubs lineup."
"As one of the top firemen of his time, he was cited as one of the inspirations for the creation of the "save" statistic for measuring a reliever's effectiveness"

The Card: The cartoon references a stretch of games in late August thru the first week of September of 1958 in which Elston went 11 innings between allowing a hit. He picked up three of his eleven saves and only walked one batter in that run.

The 'posed action' shot of Elston is a change from the usual portrait photos that dominate this set. It was taken at Seals Stadium in San Francisco. This is a replacement card for the one that came with my original large lot. While most of the cards that were included in that group were just fine for my needs the Elston was unacceptable. Someone didn't care much for Don Elston.

Here is the original version: 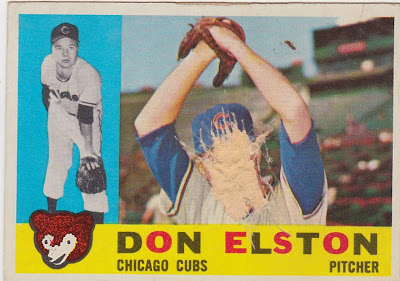 A closeup of the damage: 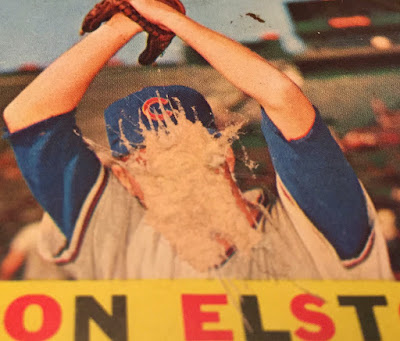