I've decided that since I've already posted the 1960 Managers cards on my regular blog I wouldn't repeat them here. But rather I'll 'piggyback' them with the team card and the Coaches card as well. Sort of a team trifecta. 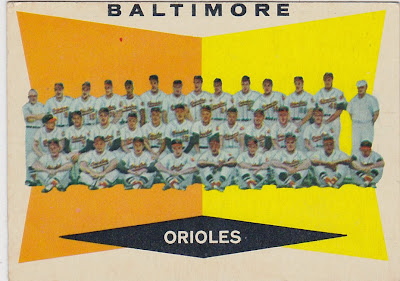 In 1960: After finishing no higher than 5th since moving from St. Louis in 1954 the Orioles flew to a second place finish in 1960. They were in 1st place in the AL on September 14 but then the bottom fell out and they slid to a finish 8 games behind the Yankees.

The pitching staff was led by a group of promising young guys including Steve Barber, Milt Pappas, Chuck Estrada and Jack Fisher. They were complimented by vets Hoyt Wilhelm and Hal Brown.


The Card: I had acquired all the Orioles related cards in this set many years ago. The large lot purchase I made to kick off my race to collect the whole thing brought me about 10 or 12, two or three of which were good enough to be upgrades over what I had. This team card was one of those. Not that the corners were any better but my original one had a badly marked checklist.

I'm fine with the condition of this one overall. I like that the orange reflects the O's colors. I wish team trainers still wore those white caps like they did way back. 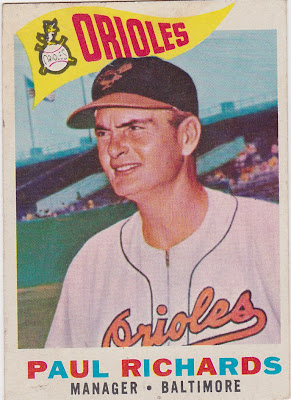 In Baltimore he was credited with developing many of the players that brought the Birds out of obscurity to a second place finish in 1960 including Brooks Robinson and several pitchers including Steve Barber, Milt Pappas and Jack Fisher who made up their young staff.

He also developed the over-sized catchers mitt that Gus Triandos and others used to handle Hoyt Wilhelm's knuckler. Although the Texan never won a pennant he managed 16 players who went on the manage in the big leagues. 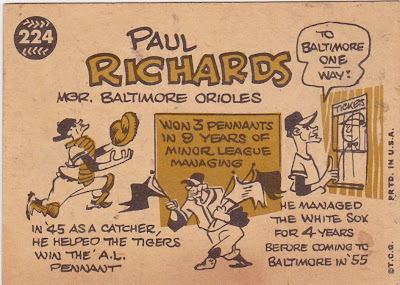 The Card: His card provides the rare look at Baltimore's Memorial Stadium on a card from this era. My favorite stadium of all. This is the first of the vertical cards I've posted. The managers, coaches and some of the specials and World Series cards are the exceptions to the horizontal dominance of the 1960 set.

Coaches Card: Eddie Robinson played 13 seasons at first base for several American League teams. He made four All Star squads. I own one of his game used gloves and used it some back when I was playing.

Harry 'The Cat' Brecheen won 133 games for the Cardinals and Browns between 1940 and 1953. He was 4-1 in World Series games winning two rings. He earned three of the Cards four wins in the 1946 WS victory over the Red Sox.

Lum Harris pitched for the A's and Nats in the 40's and led the AL with 21 losses in 1953. He made his mark on the game as a manager and coach. He finished out the '61 season as O's manager after Paul Richards was moved out of the job. He managed the Astros in the mid 60's and then had a four and a half year run as skipper of the Braves. He led them to the 1969 NL East West title but were ousted by the Miracle Mets. Join the club, Lum! 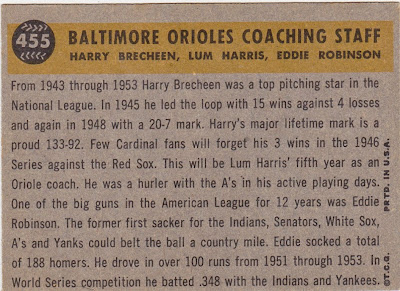 The Card: I guess this was the first year that Topps issued dedicated coaching staff cards. I distinctly recall them from collecting as a nine year old. We thought they were weird. They are numbers consecutively in the set. I wish Topps had considered just doing a small cartoon for each of the coaches on the card instead of the 'wall of text' that they used. You can tell from the back of Paul Richards card that three or four cartoons could have easily fit.

This Orioles' card is in pretty good shape. It's about as good as any of the ones I have.

Posted by Commishbob at 8:56 AM