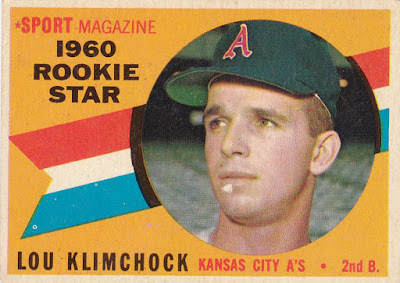 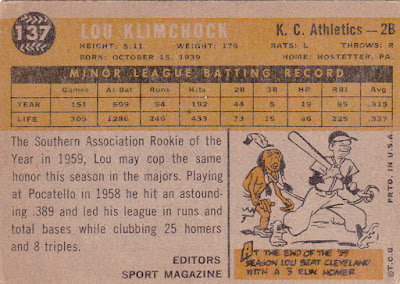 Career: Klimchock was a pinch-hitter and spare infielder who played in parts of (literally) twelve seasons between 1958 and 1970. His busiest and best season by far was 1969 in Cleveland when he was a semi-regular who appeared in 90 games and hit .287 with 6 home runs. Other than that year he had only one (1961 in KC) in which he played in as many as 50 games or had 100+ at-bats.

In 1960: Klimchock spent the month of July with the Athletics, played in 10 games, had 10 at-bats, got three hits. He spent the rest of the season with Shreveport of the AA Southern Association. He has middling stats for the season.

Off The Charts: His first big league hit was a homer when he was 18 on the final day of the 1958 season in Comiskey Park. The opposing pitcher was 19-year-old Stover McIlwain of the White Sox. Both players were making in their second big league game. It was the first time in modern baseball history that a teenager homered off a teenager. McIlwain, who gave up only that one run in going four innings, never got another chance in the majors.


Klimchock played in 12 major league seasons. He spent time in the minors in each and every one of those 12. I have no idea if that's a record but it certainly is worth noting.

He's the third most famous native of Latrobe, Pa. which was also home to Mr. Rogers and Arnold Palmer.