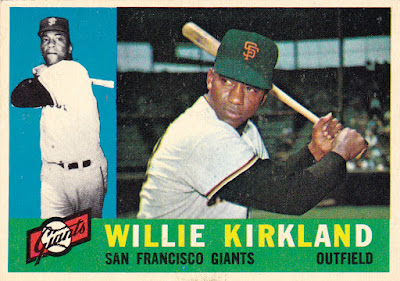 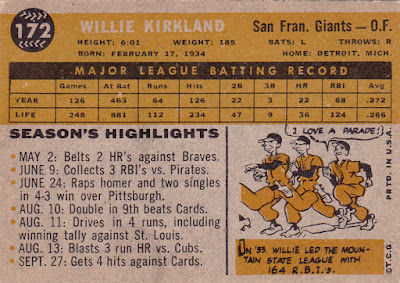 Career: Kirkland was a minor league stud in the Giants' chain after signing in 1954. He had power to burn and moved up through the system. He spent 1957 in the Army and came back to open the 1958 season in the Giants outfield. He was even slotted as their clean-up hitter on Opening Day. But he struggled and was sent to the minors for part of the month of June. When he returned he homered in his first game and raised his average 40 points from the .218 he was hitting when demoted.

He displayed good but not great power for three seasons as the club's right fielder but was traded to the Indians and had a fine year in 1961. Things went mostly downhill from there, and he was dealt to the Orioles in 1964. The Birds moved him to Washington late that summer, and he stayed in DC through 1966. His numbers had taken a tumble and he played AAA ball in 1967 before trying his luck in Japan where he had a nice run as a power hitter and popular star for several years.

In 1960: This was his third and final year on the West Coast. His slash line of 21/65/.252 wasn't good enough to hold off the other young talent in the Giants' system. With Mays, McCovey, Cepeda, and the Alou Brothers in the picture the Giants moved Kirkland for a 30-year-old Harvey Kuenn who lacked Kirkland's power but was more consistent and experienced.

Off The Charts: Kirkland played in Japan for six seasons with the Hanshin Tigers. I found this Tigers English News page about Kirkland and it features a video of the 1973 Japan World Series won by the Tokyo Giants over Kirkland's Tigers. Kirkland appears at about 1:10 when he whiffs to end the game and the Series.