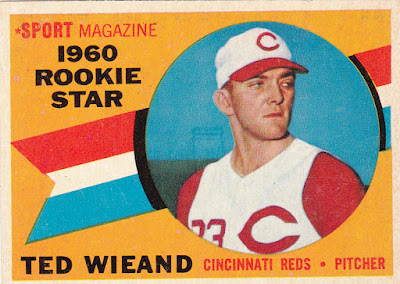 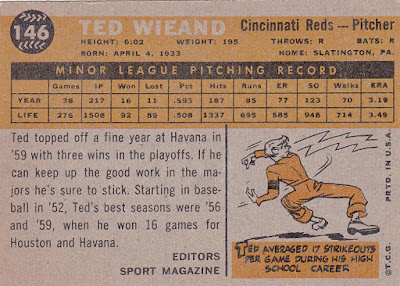 Career: Originally in the Cardinals chain, Wieand spent seven seasons in the minors before he got a one-game taste of the majors with Cincinnati at the tail end of the 1958 season. He had come to the Reds the previous winter in the deal that sent Curt Flood to St. Louis. Other than another short trial with the Reds two years later, Weiand played out his career at the AAA level with the Reds and Yankees before he retired after the 1962 season. In his six total games, his only decision was a loss in his second game in '60.

In 1960: Wieand made the Reds' roster out of Spring Training but was knocked around in five shots out of the pen and was demoted to AAA.

Wieand's father was unemployed when young Ted was born in 1933, the last of 10. Grateful for President Franklin Roosevelt's WPA, which gave him an income in hard times, the elder Mr. Wieand named his newborn Franklin Delano Roosevelt Wieand. According to Ted, some in his family were not as enthusiastic about FDR as his father, and they took to calling him 'Teddy' as in Republican icon Teddy Roosevelt.

This came from a 2014 interview that was posted on Soundcloud. I'm unsure if the show (John Pielli's Passed Ball Show) was part of a podcast series or a local radio thing.

The Card: Neat cartoon and Wieand looks like somewhat of a badass on this, his only Topps card, no?
Posted by Commishbob at 7:00 AM