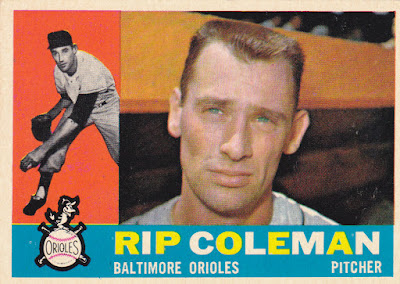 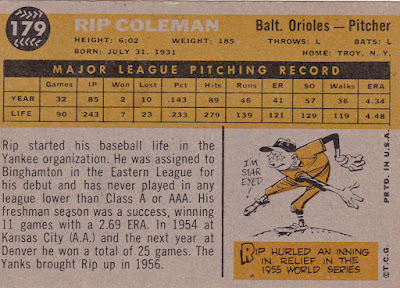 Career: Coleman was a 1952 Yankee signee, labeled as "The Next Whitey Ford" by some. He never lived up to that billing in the majors. He had his moments as a minor leaguer and in a few interviews I came across he said he was just more comfortable in the minors. His early results in New York were decidedly mixed and he was one of many Yankees traded to the Athletics in the mid-50s. He had limited success in KC, never harnessed his talent, never overcame his wildness. He finished with the Orioles in 1960 and his big league numbers were 7-25 with a 4.58 ERA.

In 1960: He'd come to the Orioles late in 1959 and pitched a few innings and made the team in the Spring of 1960 but was shelled in four appearances including a start in Yankee Stadium in which he was lifted in the first. He was let go in May and went to Toronto to play for the Indians AAA club there and in typical fashion had a very good year.

Off The Charts: Coleman tells a story of being assured that he wasn't going to be used in the '55 Series games in Brooklyn. Then he found himself on the mound in Ebbets Field in Game Four, and he struggled in the spotlight. He helped write his ticket out of New York the next year when he chose to throw a ball into centerfield rather than hand it to Casey Stengel when Casey came to relieve him in favor of Tom Morgan. Coleman said he was tired of Morgan blowing up his leads.